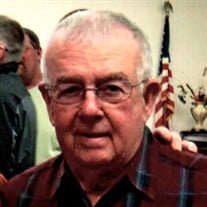 Charles “Bill” William Murdock, age 83, of Wataga, Illinois, died at 1:50 A.M. on Thursday, January 9, 2020 at the Galesburg Cottage Hospital in Galesburg, Illinois, surrounded by his loved ones. On October 26, 1936, Bill was born on his family farm in Williamsfield, Truro Township, Illinois. He was the son of William L. and Gladys P. (Murphy) Murdock. He graduated from ROVA High School with the class of 1954. After graduation he enlisted in the United States Army with his three close friends: Roger Seibolt, Ron Moody, and Phillip Wagher, proudly serving his beloved country for three years. Bill was married to Dorothy J. Brown on June 15, 1958 at the Ontario Congregational Church in Oneida, Illinois. He is survived by his loving wife of sixty-one years, Dorothy J. Murdock of Wataga; their three children: Dawn Marie (and Gregg) Roegge of Rushville, Illinois, William (and Angie) Murdock of Wataga, Robert (and Vicki) Murdock of Oneida; eight grandchildren: Shon (and Lindsay) Roegge, Sarah Roegge, Caleb (and Adrienne) Roegge, Matthew (and Sarah) Murdock, Noah Murdock, Benjamin Murdock, Ashlyn Murdock, Clark Murdock; one great-grandchild on the way; one sister, Carole (and Gary) Gibbs of Lafayette, Illinois; and one brother, Jerry (and Kris) Murdock of Galena, Illinois. He was preceded in death by his parents. Bill worked for many years as a coal miner, retiring from the Freeman Coal Company in Industry, Illinois. He was a dedicated and active member of the United Church of Oneida. He was also a member of the United Mine Workers, Western Illinois Bee Club, Knox County Farm Bureau, and a former member of the Lions Club, Elks Lodge #890, and the Scotland Trinity Presbyterian Church. Bill will be remembered for his great love of the outdoors. He could often be found hunting, fishing, gardening, and hunting for mushrooms, as well as tending to his apple orchard and beloved beehives. He was a skilled dancer; he and Dorothy greatly enjoyed ballroom dancing together. He also loved to spend time with his grandchildren, attending their activities whenever possible. Bill was a proud vegetable farmer, and he delighted in showing his prized vegetables at the Knox County Fair. For over thirty years, he sold vegetables and honey at area farmers markets. More than anything, Bill was a kind and loving husband, father, grandfather, brother, and friend who will always be missed and lovingly remembered. Visitation will be held from 2:00 P.M. to 4:00 P.M. on Sunday, January 12, 2020 at the Hurd-Hendricks Funeral Home in Oneida. The funeral service will be held at 10:00 A.M. on Monday, January 13, 2020 at the United Church of Oneida, Rev. David Pyell officiating. Interment will be at the Oneida Cemetery. Memorial contributions may be made to the United Church of Oneida or to the ROWVA School Foundation. To send flowers or a memorial gift to the family of Charles "Bill" W. Murdock please visit our Sympathy Store.
To send flowers to the family in memory of Charles "Bill" W. Murdock, please visit our flower store.