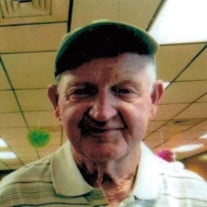 Carter Jay Cecil, age 90, of Knoxville, Illinois died at 4:15 P.M. on Friday, April 10, 2020 at the Knox county Nursing Home in Knoxville, Illinois. Jay was born on June 22, 1929 in Maquon, Illinois the son of Russell X. and Clara L. (Smith) Cecil. He was married on July 11, 1951 to Joyce Burnaugh in Knoxville, Illinois. His wife Joyce preceded him in death on April 28, 2013. He leaves behind two children: Steve (Donna) Cecil of Gilson, Illinois and Renee (Ron) Curry of Knoxville, Illinois; six grandchildren: Ryan Cecil of Gilson, Illinois, Rachel (J.D.) Mathews of Olive Branch, Mississippi, Bill (Shelby) Sharp of Olive Branch, Mississippi, Jason sharp of Mesa, Arizona, Shane (Kate) Curry of Marietta, Illinois, Brett (Marissa) Curry of Knoxville, Illinois; Fourteen great grandchildren; Four great-great grandchildren; his siblings: Beverly Cecil of Galesburg, Illinois and Robert Cecil of Knoxville, Illinois; and many nieces and nephews. He was preceded in death by his parents, wife, one great grandson, two sisters, Lila and Lena; three brothers, Bernard, Burton and Kenneth. He owned and operated Cecil Plastering Company for over 47 years and farmed in rural Knoxville, Illinois. He served in the United States Army during the Korean conflict. He was a member of the Harry Philblad American Legion Post #749 and served on the Honor Guard. He enjoyed fishing and boating, was an avid Bears and Cubs fan, and watching NASCAR. Friends and relatives may call from 1:00 P.M. until 7:00 P.M. on Wednesday, April 15, 2020 at the Hurd-Hendricks Funeral Homes & Crematory in Knoxville, Illinois, family will not be present. Graveside services will be held on Thursday, April 16, 2020 with Rev. Jordan Knight officiating. Military rites will be conducted by the VFW/American Legion/AmVets Honor Guard. A celebration of life with family will be held at a later date. Memorial contributions may be made to St. Jude’s. Online condolences and expressions of sympathy may be made through www.hurd-hendricksfuneralhome.com. To send flowers or a memorial gift to the family of Carter Jay Cecil please visit our Sympathy Store.
To send flowers to the family in memory of Carter Jay Cecil, please visit our flower store.