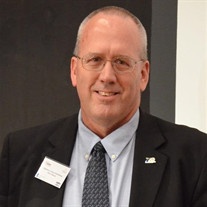 Bruce Johnson, age 60, passed away on December 5, 2018, at Serenity Hospice in Oregon, Illinois. Bruce is survived by his wife, Andrea; two sons: Michael (and Cassie) Johnson, of Des Moines, Iowa, and David (and Andrea) Johnson, currently residing in Escanaba, Michigan; five grandchildren: Claire, Cora, Clay, Sofia and Daniel; his father, Howard Johnson of Knoxville, Illinois; and one brother, Jeff (and Laurie) Johnson of Knoxville, Illinois. He was preceded in death by his mother, Barbara Johnson of Knoxville, Illinois. Bruce and Andrea celebrated their 40th wedding anniversary on March 18th of this year and had been celebrating by running a 5K race each month until Bruce’s battle with glioblastoma made it too difficult for him to continue. Bruce was born on February 4, 1958 in Galesburg, Illinois. He graduated from Knoxville High School in Knoxville, Illinois in 1976 and farmed with his father, Howard, before beginning a career with the Illinois Farm Bureau family of companies that spanned a period of over 36 years. At the time of his death, he had been serving as the manager of the Stephenson County Farm Bureau in Freeport, Illinois since January of 2004. He also served on the boards of State Bank of Freeport, the Stephenson County Beef Association, the United Way of Northwest Illinois, CAP Foundation, Freeport Rotary, Stephenson County Ag Breakfast and the Stephenson County Fair Association. He was involved with the Highland Community College Ag Advisory Committee, Chicago High School for Ag Sciences Advisory Board, the Freeport Chamber of Commerce, the FFA Alumni Association and the AgrAbility Unlimited. Bruce’s community involvement as well as his extensive involvement in promoting agriculture have been lifelong passions. At the age of 29, he was named as a 150 Percent Achiever by the Galesburg Register-Mail, in Galesburg, Illinois. At the time he was serving as a director on the Knox County Farm Bureau board as well as secretary of the Knox County Corn Growers Association and president of the Knox County Pork Producers. He was also an active member of Choral Dynamics and had served as president during that time, helping to raise thousands of dollars for local charities by using his gift and love of music. Bruce and Andrea shared a strong faith and are members of Prince of Peace Lutheran Church in Freeport, Illinois. A memorial service is scheduled for Thursday, December 13, 2018 at 10:30 A.M. at Grace Lutheran Church, in Knoxville, Illinois with a reception to follow at the American Legion, Knoxville, Illinois. Pastor Myron Herzberg, of Nevada, Iowa will officiate. All are welcome to attend and celebrate Bruce’s life. Memorials may be made to Roots and Shoots, a program of the Stephenson County Farm Bureau. It was established by Bruce to help provide opportunities for young people to engage in career exploration through job shadowing and internships as well as other avenues so that tomorrow’s agriculture leaders can help to grow and promote the industry and values that meant so much to him. Memorials may also be made to Lutheran Outdoor Ministries Center. A year-round camping and retreat facility, LOMC is committed to be the Church in outdoor settings, nurturing Christian faith and providing experiences connecting the Word of God with the World of God. The Hurd-Hendricks Funeral Home in Knoxville, Illinois is assisting the family with arrangements. To send flowers or a memorial gift to the family of Bruce Johnson please visit our Sympathy Store.
To send flowers to the family in memory of Bruce Johnson, please visit our flower store.