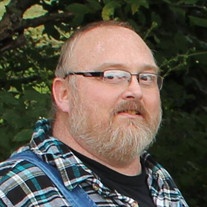 Bradley Wayne Hall, 52, of Rock Falls, Illinois, formerly from Williamsfield, Illinois, died on Wednesday, February 10, 2016, at his home. He was born on September 13, 1963 (Friday the 13th), at St. Mary’s Hospital in Galesburg, Illinois, the fourth son of Lawrence (Slug) and Gladys Lucille (Theda) Hall. He graduated from Williamsfield High School in 1981 and attended the Automotive Tech Institute in Wichita, Kansas. He married Roberta (Bobbi) Strom on April 9, 1988, in Brimfield, Illinois. Brad worked as a farmhand for Bob Strom for many years. He then worked at Ivex Paper Mill in Peoria, then obtained a CDL and drove a truck for numerous trucking companies. He also CUT A LOT OF WOOD. Brad was somewhat of a grease monkey and enjoyed wrenching on cars, especially restoring his and Brandon’s 1975 Chevy Camaro. He enjoyed watching mud bogs and truck/tractor pulls. Brad was a man of few words, but he had a heart as big as his body. He had a kind spirit and loved spending time with his boys and grandson. Survivors include three sons: Brandon (Tillie) Hall of Williamsfield, Illinois, Bryan (Brandy Behrens) Hall of Sterling, Illinois, and Blake Hall of Victoria, Illinois; one grandson, Braxton Hall; two brothers: Barry (Karen) Hall of Knoxville, and Bruce Hall of Galva. Brad was preceded in death by his parents and one brother, Brent Hall. Funeral Services will be held at 1:00 P.M. on Saturday, February 13, 2016 at the Hurd-Hendricks Funeral Homes & Crematory in Knoxville, Illinois. Visitation will be held from 11:00 A.M. until 1:00 P.M. on Saturday, February 13, 2016 at the Hurd-Hendricks Funeral Homes & Crematory in Knoxville, Illinois. A fellowship will take place at the Hurd-Hendricks Fellowship Center following the funeral services before proceeding to the cemetery. Interment will be in the Williamsfield Cemetery in Williamsfield, Illinois. In-lieu of flowers, memorials may be made to the family. On-line condolences and sympathy card may be sent though www.hurd-hendricksfuneralhome.com To send flowers or a memorial gift to the family of Bradley Wayne Hall please visit our Sympathy Store.
To send flowers to the family in memory of Bradley Wayne Hall, please visit our flower store.