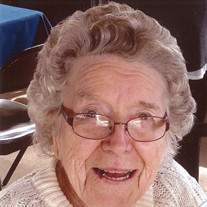 Galesburg, Illinois formerly of Abingdon, Illinois Bertha Mae Bowman Carr, age 97 of Galesburg, Illinois formerly of Abingdon, Illinois died at 6:28 P.M. on Sunday, September 10, 2017 at the Knox County Nursing Home in Knoxville, Illinois. She was born on February 15, 1920 in Canton the daughter of Elmer and Dora Fulton Ritchie. She was raised in Galesburg, graduating from Galesburg High School. She married George DeClifford “Cliff” Bowman. He preceded her in death in 1977. She then married Edward Carr in 1983. He also preceded her in death. Surviving is a daughter: Judith (Gordon) Holmgren of Galesburg, Illinois; one step son Dean (Kathy) Carr of Seattle, Washington; two grandchildren: Elizabeth (Reed) Hollander of North Carolina and Scott (Christine) Holmgren of Michigan; step grandsons: Christopher (Kathryn) Carr of Massachusetts, Jonathan Carr of Washington, Andi Dennison, Emily and Nathan Padilla of Michigan; great-grandchildren: Linnea and Logan Hollander, Aidan and Rowan Holmgren; step great-grandchildren: Adam and Jacqueline Carr; and many nieces and nephews. She was preceded in death by a daughter: Jill C. Bowman; her brothers and sisters: Esther Stout, Thelma Onderko, Delbert Ritchie, Billie Ritchie and Betty Joseph. She volunteered at Galesburg Cottage Hospital in the Emergency Room and the Professional Building for many years. She also was a hostess at the Homestead Restaurant in Woodhull, Illinois for several years. A special thank-you to Hospice Compassus for being there for her. We want to especially thank the staff on Wing 1 (past & present) plus others who took such wonderful care of her while she lived there. You are all special people. Cremation rites will be accorded. Graveside Memorial Service will be held on Saturday, September 23, 2017 at 10:30 A.M. at Oak Lawn Memorial Gardens in Galesburg, Illinois. In-lieu of flowers, memorial contributions may be made to the Friends of Knox County Nursing Home, 800 Market Street, Knoxville, Illinois 61448. Hurd-Hendricks Funeral Homes and Crematory in Knoxville, Illinois is in charge of arrangements. Online condolences or expressions of sympathy can be made through www.hurd-hendricksfuneralhome.com. To send flowers or a memorial gift to the family of Bertha M. Carr please visit our Sympathy Store.
To send flowers to the family in memory of Bertha M. Carr, please visit our flower store.