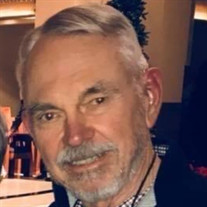 It is with great sadness that the family of Tom McMaster of Lincoln, NE, share that he passed away September 5th, 2020. Tom’s battle with Parkinson’s rapidly progressed during his last weeks of life. He passed peacefully in his home surrounded by his family. Services will include a mass held on Friday, September 11th at 10am, St. Aloysius Church in Wataga, IL, with burial immediately following at Oneida Cemetery. Due to COVID-19 restrictions, face masks, social distancing and attendance limitations will be required. On-line condolences or expressions of sympathy may be made through www.hurd-hendricksfuneralhome.com. In lieu of flowers, contributions may be made to: • The Wounded Warrior Project • Amedisys Hospice Care: 5715 S 34th St. STE.100, Lincoln, NE, 68516 Arthur Thomas McMaster III was born September 14th, 1944 in Galesburg, IL, to Catherine and Arthur “Tom” McMaster. He attended ROVA High School where he was an honor student and he was active in baseball, football and other sports. Tom was valedictorian of his high school class of ’62. He went on to attend University of Illinois at Champagne -Urbana and joined ROTC. He graduated with a degree in civil engineering and received officer’s commission as a second lieutenant in the U.S. Army. In 1966 he met the love of his life, Aldeene “Deanie” Warner. They married September 2nd, 1967. They were blessed with three children whom he loved dearly. Tom was later deployed to Vietnam to serve as a helicopter pilot during the Vietnam War from August 1970 – June 1971. Tom flew Huey helicopters as the Aircraft Commander in the Lift Platoon with “Dutchmasters”, B Troop, 7th of the 1st Air Calvary. Tom was awarded various medals for his service, among them, the Distinguished Flying Cross for heroism and the Vietnam Cross of Gallantry. Tom began his work career as a civil engineer which took to various places in the Midwest; Kansas City MO, Hastings NE, Lakewood CO, Houston TX and Carthage IL. He was instrumental in designing natural gas pipelines and ensuring their quality and safety. Along his career path he gained the respect of many colleagues and, most importantly, friends that he loved to stay in touch with over the years. Tom loved to golf and play tennis in his spare time, even up until the end he discussed his last golf lesson at their “snow-bird” condo in Florida where Tom and Deanie would winter each year from January through March. Together they had a passion to travel and research their families’ heritage, visiting Scotland and Ireland as well as other destinations they were excited about. He greatly loved his siblings and was proud to tell stories of their upbringing on their farm outside of Oneida. He loved and respected his parents, Tom and Katie, and adored taking his family to visit his parents’ lake house at Oak Run where the family would gather, spend time boating, water skiing, fishing, laughing, and reminiscing. He fiercely adored his grandchildren, visiting them and attending any sports functions that he could. He was loyal, very intelligent, had a quirky sense of humor (sometimes called “Don Rickles” by his family). Tom loved to maintain his yard and took pride in teaching his children the “art of mowing” and love of landscape. It delighted Tom to buy gifts for Deanie for her birthday and anniversary. Throughout his life, he maintained a high level of integrity and grit, never showing signs of struggle or complaint even during the hardest times of his illness. Tom was many things, too many to remark, but most importantly he was loved completely by his family. He will be greatly missed to all who knew him. Tom is preceded in death by his parents, Katie and Tom, and granddaughter, Leia McMaster. He is survived by his wife Deanie, children Tom McMaster (Sarah), Jenny Sutko (Dave), Andrew McMaster (Sarah); his grandchildren Thomas and Conor McMaster; Emma, Joe and Sam Sutko. His siblings Mary Stein (Barry), Peg Wenstrom (Roger), Jim McMaster (Gloria) and Marti Hurst (David), and many nieces and nephews. To send flowers or a memorial gift to the family of Arthur Thomas McMaster III please visit our Sympathy Store.
To send flowers to the family in memory of Arthur Thomas McMaster III, please visit our flower store.