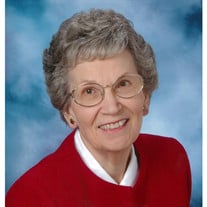 Arleen Newby of Knoxville died October 27, 2018 following a brief illness. She was 89. She was born August 29, 1929 in Chatsworth to Clarence and Florence (Miller) Shols and was raised on the family farm. She graduated from Chatsworth High School in 1947 and Illinois State University in 1951. She married Max Newby on October 25, 1953. He died in 2016. She was also preceded in death by her parents and her brother Donald Shols. She is survived by their sons Stephen (Roberta) Newby of Independence MO and Thomas (Karen) Newby of Princeton, four grandchildren and nine great-grandchildren. She was a full-time homemaker when her children were young. She later worked as a legal secretary for John Hanlon and Dale Ruedig in Galesburg. She was an active member of the Knoxville United Methodist Church, including United Methodist Women and many other activities. Max and Arleen enjoyed dancing with several other couples for many years. They enjoyed traveling and spending time with their family and friends. The family would like to thank Courtyard Estates in Knoxville and Hospice Compassus for their care. Visitation will be held on Saturday, November 3, 2018 from 10:00 A.M. to 11:00 A.M. at the Knoxville United Methodist Church. The funeral service will directly follow at 11:00 A.M. Interment will be in the Knoxville Cemetery. Rev. Steve Hartman will be officiating the services. Memorial contributions may be left to the Knoxville United Methodist Church. The Hurd-Hendricks Funeral Home and Crematory in Knoxville is assisting the family with arrangements. Online condolences can be made at www.hurd-hendricksfuneralhome.com. To send flowers or a memorial gift to the family of Arleen Newby please visit our Sympathy Store.
To send flowers to the family in memory of Arleen Newby, please visit our flower store.