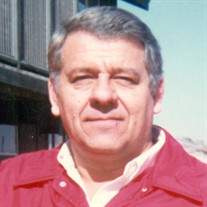 Anthony L. “Tony” Zefo, age 80, of Lake Bracken, Galesburg, Illinois died at 1:54 A.M. on Friday, December 11, 2015 at Methodist Medical Center, Peoria, Illinois. He was born on February 23, 1935 in Galesburg, Illinois the son of Tony and Elizabeth Morrisey Zefo. He attended and graduated from Galesburg High School in Galesburg, Illinois. He married Marlene Trout, then later married Sharon L. Sisty Stroops on March 17, 1987 in Ocala, Florida. She survives of Lake Bracken, Galesburg, Illinois. Also surviving are his step children: Carl Stroops III of South Elgin, Illinois and Ronald (Linda) Stroops of Galesburg, Illinois; Six step grandchildren and eight step great grandchildren; his brothers, Robert Zefo of Oneida, Illinois and Jack Zefo of Galesburg, Illinois; a sister, Patricia Morris of News Park, California. He was preceded in death by his parents, a sister, Betty Owen, a brother, William Zefo and a step son: David Stroops. He worked as an electrician for the IBEW 34 Galesburg and Peoria, Illinois. He and his wife lived at Lake Bracken, where his enjoyed playing Golf. Cremation Rites will be accorded. A visitation will be held from 4:00 P.M. to 6:00 P.M. on Wednesday, December 16, 2015 at the Hurd-Hendricks Funeral Homes & Crematory in Knoxville, Illinois. Memorials may be made to the Charity of the Donor’s Choice. On-line condolences may be left at www.hurd-hendricksfuneralhomes.com. To send flowers or a memorial gift to the family of Anthony Zefo please visit our Sympathy Store.
To send flowers to the family in memory of Anthony Zefo, please visit our flower store.