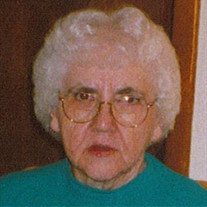 BEAVERCREEK, OHIO FORMERLY OF GALESBURG, ILLINOIS Anna May Russell, 88, of Beavercreek, Ohio, formerly of Galesburg, Illinois, died at 12:23 P.M. on Wednesday, August 9, 2017 at Trinity Community Nursing Home in Beavercreek, Ohio. She was born on March 24, 1929 in Keokuk, Iowa, the daughter of Roy and Esther (Williams) Davis. She married Lawrence O. “Russ” “Polkadot” Russell in Galesburg, Illinois. She is survived by three children; Ruby Crane of Wataga, Illinois, Peggy Brown of Idaho Falls, Idaho, and Randy Russell of Beavercreek, Ohio; ten grandchildren and ten great grandchildren. She is also survived by two sisters and a brother; Ruth Roberts of Carthage, Illinois, Norma Reynolds of Keokuk, Iowa, and Kenny Davis of Keokuk, Iowa. She is preceded in death by her parents, husband, a son, one sister and one brother. She was a member of the First Church of the Nazarene in Galesburg, Illinois. She was active in the church nursery when she was younger. She enjoyed doing word searches and loved being with her grandkids. Visitation will be held on Monday, August 14, 2017 from 10:30 A.M. to 11:30 A.M. at Hurd-Hendricks Funeral Home in Knoxville, Illinois, followed immediately by the Funeral Service, Rev. Harold Berrian officiating. Interment will be in the Knoxville Cemetery in Knoxville, Illinois. Memorial contributions may be made to the First Church of the Nazarene in Galesburg, Illinois. Online condolences or expressions of sympathy can be made at www.hurd-hendricksfuneralhome.com To send flowers or a memorial gift to the family of Anna May Russell please visit our Sympathy Store.
To send flowers to the family in memory of Anna May Russell, please visit our flower store.