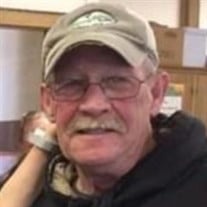 Ancil David “Dave – Weeser or Unk” Dennis, 71, passed away at 2:50 P.M. on Friday, April 24, 2020 in his cabin paradise on the backwaters of the mighty Mississippi with the catch of his life, Beckey Condreay Dennis, Siamese cat “Paloe”, and beloved dog “Reba” at bedside. Children, grandchildren, extended family, and friends were there as well in spirit. Dave was born March 29, 1949 to Ancil R. and Elsie Louise (Sullens) Dennis in Galesburg, Illinois. He married Beckey Condreay and her family January 1, 2008 in their “party barn.” Surviving are his wife and the “love of his life,” Beckey Dennis of Oquawka, Illinois; his step-children: Mark (Adonna) of Lucedale, Mississippi, Gary (Kathy) of Abingdon, Illinois, Ryan (Katie) of Alexis, Illinois, Adam (Shanae Ford) of New London, Iowa; and step-daughter-in-law Lisa of Galesburg. All of the above are Condreays. Also surviving is a step-daughter, Sara (Virgil) Borchelt of Roseville, Illinois; his children: Krystal Thompson of Los Angeles, California, Brian (Jennifer) of North Liberty, Iowa, Kyle (Jessica) of Galesburg, and Bret (Laurie) Plue of Cape Coral, Florida. Dave was preceded in death by his step-children: Mike and Chad Condreay; and son, Brad Dennis. Surviving and most loving grandchildren: Trey Dennis, Cyerra (Tanner Barker), Tyler, Madelyn, Teagan, Gabe, Clayton, Calvin, and Crew Condreay, BreAnna (John) Ewing, Harley (Hunter Yearns) Morss, Christian (Kriste Wright) Sparkman, Josh and Zach McCune, Makynna and Xander Carpenter; great-grandchildren: Chevy Barker, Scarlet Condreay, Wrett Ewing, and Emma Sparkman; a very special sister-in-law, Virginia Dennis (Ginny and Dick were a second set of parents); and nieces and nephews: Susie, Sandy, Tom, Terry, and Tim. Preceding Dave in death were his parents; two brothers, Dick and Fred; and wife of thirty-one years, Vicki (Weinberg) Dennis. Dave retired as a conductor from Burlington Northern and Connor Company. He was a lifetime member of Local 195 where he was known as “Unk”, as well as the United Transportation Union. He was a charter member of the Tri County Diver Down Scuba Club and Knox County Sheriffs Department. He was an accomplished PADI scuba diver, open/advanced water diver, rescue diver, first aid medic, specialty diver/ equipment & night, and master scuba diver. Weeser was an avid Nascar fan, builder of race cars (Knox County Speed Way); he cherished life on the Mississippi River, including duck and deer hunting, fishing, and boating with his “Babe – Beckey.” A lover of his many past Labradors as well. He also cherished snow mobile memories with friends. Cremation at Hurd-Hendricks Funeral Home & Crematory in Knoxville, Illinois, per his wishes, has been accorded. A Celebration of Life will be held in he and Beckey’s Party Barn along the mighty Mississippi at 2411 Road 1325 East, Oquawka, Illinois from 2:00 P.M. until 6:00 P.M. on Saturday, July 11, 2020. Bring a dish to pass and your beverages. Memorials may be made to the family or Compassus Hospice. Enjoy a good joke or a beer in memory of Dave “Weezer or Unk.” Blessings! To send flowers or a memorial gift to the family of Ancil David "Dave - Weeser or Unk" Dennis please visit our Sympathy Store.
To send flowers to the family in memory of Ancil David "Dave - Weeser or Unk" Dennis, please visit our flower store.