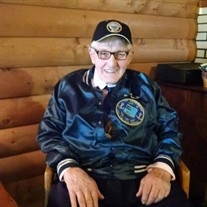 Allan “Al” Youngquist, age 95 of Oneida, Illinois died on Friday, November 6, 2015 at his son’s home in Powell, Tennessee. He was born on December 14, 1919 in Somerset, Wisconsin the son of Leonard R. and Ruth Kriesel Youngquist. He was reared and educated in Landing Hills in Somerset, Wisconsin graduating from the Stillwater High School in Minnesota. He married Della Jean Manthe on April 6, 1952 in Kewanee, Illinois. She preceded him in death on June 13, 1988. Surviving is one sister, Marjorie S. Stewart of Cokato, Minnesota; one son: Eric L. Youngquist of Powell, Tennessee; three grandchildren, Jessica, Erika and Emma Youngquist; and three great grandchildren: Ellie, Branden and Christopher. He was preceded in death by his parents, his brother, Glen R. Youngquist of Kissimmee, Florida and one son, Steven R. Youngquist. He graduated from Dunwoody Institute Trade School for tool & die making. He was a machinist at the John Deere Manufacturing in Dubuque, Iowa and then he managed John Deere Implement in Kewanee and Oneida, Illinois. He also worked for Rex Johnson in Oneida, Illinois; maintenance foreman for Gates Rubber Company for seven years; drag-line operator at the Middlegrove Coal Mine; seed corn dealer for Northrup King and Harlan Seed Companies. He served in the United States Navy during World War II, from January 24, 1942 until December 14, 1945 as an Aerographer’s Mate First Class. He was a member of the Altona Immanuel Lutheran Church in Altona, Illinois and served on the Altona Lutheran Church Council for 11 years. Member of the Rylander-Milroy American Legion Post 727 in Oneida, Illinois. He was active in the Honor Guard for many years, playing the “Taps” for the military funerals. Former member of the Oneida Masonic Lodge then transferred to the Rio Masonic Lodge #685 A.F. & A.M. of Rio, Illinois and the Peoria Mohammed Temple. He was Scout Master for the Kewanee and Oneida, Illinois areas. Cremation rites will be accorded. Visitation will be held on Friday, November 13, 2015 from 5:00 P.M. – 7:00 P.M., at the Hurd Hendricks Funeral Home in Oneida, Illinois. A memorial service will follow at 7:00 P.M. Rev. Tim Anderson will officiate. Military rites will be conducted after the service. Inurnment will be held at the Immanuel Lutheran Cemetery in Somerset, Wisconsin. In-lieu of flowers memorials may be made to the Rylander-Milroy American Legion Post #727 of Oneida, Illinois, Altona Immanuel Lutheran Church, or the Galesburg Rescue Mission. On-line condolences or sympathy cards may be sent through www.hurd-hendricksfuneralhomes.com To send flowers or a memorial gift to the family of Allan Youngquist please visit our Sympathy Store.
To send flowers to the family in memory of Allan Youngquist, please visit our flower store.