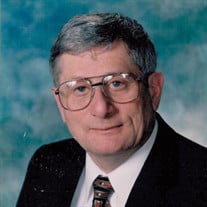 Alan Allen, 81, Galesburg, passed away on Sunday, August 16, 2020, 8:40 AM, at home with his family by his side. Alan was born on June 4, 1939 in Peoria. He was the son of Gale and Thelma (Drury) Allen. Alan married Irene G. Kantak on October 27, 1961. Together they celebrated 58 years of marriage. Alan is survived by his wife, Irene at home; children, Michael (Jeanne) Allen of Galesburg and Robert (Gretchen) Allen of Oswego; siblings, Barbara Mittermaier of Leesburg, Judi Allen of Wickenburg, AZ, and Jeffrey Allen of San Diego, CA; five grandchildren, Andrea Allen, Sophia Allen, Allison Allen, Kathryn Allen and Nicholas Wynn; and one great-grandchild, Landen Wynn. He was preceded in death by his parents. Alan graduated from the Western Military Academy. He was a veteran of the United States Army, where he served as a combat engineer in Lebanon. Alan was partners with Jim Whitney for Allen-Whitney Yamaha. He then went on to work in auto sales, becoming a sales manager at Essig-Uftring in Aledo. Afterwards, Alan went and worked as a highway maintainer for the Illinois Department of Transportation, where he also took care of the rest area on I-74. Alan was a member of the Pacific Lodge #66, Scottish Rite Valley of Peoria, and the Lake Bracken Country Club. In his free time Alan loved to go shooting, ride snow mobiles and motorcycles and golf. Alan always had the “highest game” on the golf course. He also had an affinity for street rods. Most of all, Alan loved to spend time with his family. Visitation will be held from 5-7 pm, on Thursday, August 20, 2020, at Hurd-Hendricks Funeral Homes and Crematory, Knoxville. Funeral services will be 10 am, Friday August 21, 2020 at the funeral home, with Rev. Tucker O’Leary officiating. Burial will follow services at the Knoxville Lutheran Church. Military rites will be conducted at graveside. Memorials may be made to the Grace Lutheran Cemetery, Knoxville. Condolences may be left to the family at www.hurd-hendricks.com. To send flowers or a memorial gift to the family of Alan Allen please visit our Sympathy Store.
To send flowers to the family in memory of Alan Allen, please visit our flower store.