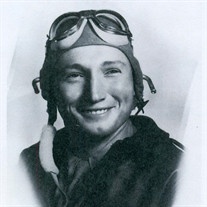 A.W. “Sandy” Sornberger, 94, of Victoria, Illinois passed away Tuesday, July 19, 2016 at 11:08 A.M. at Seminary Manor in Galesburg, Illinois. Sandy was born September 23, 1921 in rural Victoria, the son of John B. and Ella Maude (Parker) Sornberger. After graduating high school Sandy joined the United States Airforce where he served his country during WWII. On May 24, 1944 Sandy was flying over Berlin, Germany as the co-pilot of a B-17 aircraft when his plane was shot down by enemy fire. He was then held as a P.O.W. in Barth, Germany until January 24, 1945. After returning home he married Beverly A. Naslund on February 23, 1950 at the First United Methodist Church in Galesburg, Illinois. He was employed by the United States Postal Service as a rural mail carrier for over 40 years. Sandy was one of the founding members of the Little John Conservation Club, member of the Lions Club, National Rifle Association, Victoria American Legion, ROWVA school board, and he also served Victoria as the Mayor. Many will also remember him as lifelong Chicago Cubs and Green Bay Packers fan, as well as an avid fisherman, trapper, outdoorsman and bowler. He is survived by his loving wife of 66 years, Beverly Sornberger, 5 children; Jerry (and Maureen) Sornberger of Kewanee, Illinois, William (and Linda) Sornberger of Dahinda, Illinois, Robert (and Jana) Sornberger of Robinson, Illinois, Jacqueline (and Paul) Barry of Buda, Illinois, Rita (and David) Clark of Oneida, Illinois, 9 grandchildren; Amanda (and Tyler) Clarken of Peoria, Illinois, Megan Sornberger of Peoria, Joe (and Amy) Sornberger of Dahinda, Illinois, Jill (and Ryan) Dawson of Mountain View, California, Nicole (and Roberto) Batista of Peoria, Stacey (and Michael) Stewart of Peoria, Emily (and David DesJardins) Barry of Peoria, Drew (and Jacqueline) Clark of Chicago, Illinois, Jacob (and Ellen Hendricks) Clark of Mason City, Illinois, 4 step-grandchildren; Tom (and Kerry) Brock of Metamora, Illinois, Jennifer (and Steve) Witte of Kewanee, Craig Hilman of Abingdon, Illinois, Angie (and Chad) Goff of Dahinda, 6 great-grandchildren, and 12 step-great-grandchildren. Sandy was preceded in death by his parents, 6 brothers and 3 sisters. Visitation will be held Wednesday, August 3, 2016 from 10:00 A.M. to 12:00 P.M. at the Hurd-Hendricks Funeral Home in Oneida, Illinois. The memorial service will take place directly following the conclusion of the visitation at noon. Inurnment will be held at the Victoria Cemetery, in Victoria, Illinois. Memorial contributions can be made to the Little John Conservation Club or to the Victoria United Methodist Church. Online condolences may be left at www.hurd-hendricksfuneralhome.com. To send flowers or a memorial gift to the family of A.W. "Sandy" Sornberger please visit our Sympathy Store.
To send flowers to the family in memory of A.W. "Sandy" Sornberger, please visit our flower store.