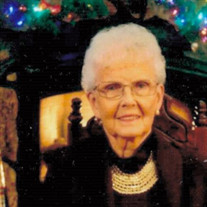 Wilma J. “Tillie” Olson, age 94 of Knoxville, Illinois died at 6:20 A.M. on Monday, March 14, 2022 at the Knox County Nursing Home, Knoxville, Illinois. She was born on January 17, 1928 in Norris, Illinois, the daughter of William F. and Lena Belle (Wilson) Roseboom. She attended and graduated from Farmington High School in 1946. She married Harold Olson on May 29, 1948 in Yates City, Illinois. He preceded her in death on March 5, 2008. Surviving is a daughter: Lynne (Greg) West of Knoxville, Illinois; a son: Brad Olson of Normal, Illinois; three grandchildren: Christine (Jake) Chiodo of Normal, Illinois, Adrienne (Nick) Caccamo of Schaumburg, Illinois, and Emily West of Edwards, Illinois; and four great grandchildren: Addison, Dominic, William, and Charlotte as well as many nieces and nephews. She was preceded in death by her parents, husband, four brothers and four sisters. Tillie worked for JC Penney in Canton, Illinois and then Dan Stevens Insurance Agency in Williamsfield, Illinois. She was a member of the Williamsfield United Methodist Church. She enjoyed sewing, cooking and baking. She was devoted to her family, and she loved to host big family dinners. She also was a member of the Women’s Club in Williamsfield, Illinois. Tillie’s family wishes to express their sincere thanks to the Knox County Nursing Home for their care and compassion. Visitation will be held from 9:30 to 11:00 A.M. on Friday, March 18, 2022 at the Hurd-Hendricks Funeral Homes & Crematory in Knoxville, Illinois. Funeral services will be held at 11:00 A.M. on Friday, March 18, 2022 at the funeral home with Rev. Teri Shane officiating. She will be laid to rest at the Greenwood Cemetery in Canton, Illinois. Memorials may be made to the Williamsfield United Methodist Church or the Knox County Humane Society. On-line condolences and/or expressions of sympathy may be sent through www.hurd-hendricksfuneralhome.com

The family of Wilma J. "Tillie" Olson created this Life Tributes page to make it easy to share your memories.