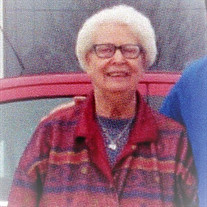 Wilma Brown, 86, of Maquon, passed away on Saturday, February 12, 2022, 10:35 PM at Heartland Healthcare Center, Galesburg. Wilma was born on November 1, 1935 in Schuyler County. She was the daughter of Fred and Tilpha (Dodds) Mohlenbruck. She married Aurthur “Art” C. Brown on October 24, 1967 in Browning, Illinois. Together they celebrated 11 years of marriage before his passing on July 1, 1978. Wilma is survived by a brother, Dick Mohlenbruck of Fredrick, IL; 13 nieces and nephews, Walt Stambaugh of Galesburg, Fairy Stambaugh of Abingdon, Bill (Janice) Stambaugh of Mississippi, Stephanie Mohlenbruck of Springfield, Marieta Kirkham of Missouri, Rudy Mohlenbruck of Fredrick, Katie Murphy of Springfield, Debbie (Ben) Tomhave of Springfield, Steve (Susie) Mohlenbruck of Beardstown, Marie Weishaar of Washington, Susan Weishaar of Rushville, Patti Johnson of Colorado and Eli Mohlenbruck of Astoria; sister-in-law, Becky Mohlenbruck of Creve Coeur; and many great nieces and nephews. She was preceded in death by her husband, parents and siblings, Etha Stambaugh, Frieda Walker, Ila Weishaar, Herman Mohlenbruck and Sam Mohlenbruck. Wilma graduated from a small country school house in Schuyler County. She was a secretary for the Secretary of States office in Springfield and then upon moving to the Knox County area, she became a secretary for the Research Facility in Galesburg and then for Zeller’s Mental Hospital until her retirement. She was a past member of the Maquon Village Board, and an avid bingo player. Wilma had an extensive collection of owls (somewhere near 400). Most of all, Wilma loved spending time with her family, especially attending various family functions or reunions where she was known for bringing her favorite pies. Wilma was a very loving and caring person who treated her nieces and nephews like her own children. She will be greatly missed by those who knew her best. Visitation will be from 10:00 AM to Noon on Saturday, February 19, 2022 at the Hurd-Hendricks Funeral Homes and Crematory, Knoxville. Funeral service will follow visitation at Noon on Saturday. Burial will be at the Maquon Cemetery, Maquon. Memorials may be made to the Feed My Lambs or to the Maquon Fire Department. On-line condolences and/or expressions of sympathy may be sent through www.hurd-hendricksfuneralhome.com

Wilma Brown, 86, of Maquon, passed away on Saturday, February 12, 2022, 10:35 PM at Heartland Healthcare Center, Galesburg. Wilma was born on November 1, 1935 in Schuyler County. She was the daughter of Fred and Tilpha (Dodds) Mohlenbruck.... View Obituary & Service Information

The family of Wilma Brown created this Life Tributes page to make it easy to share your memories.

Wilma Brown, 86, of Maquon, passed away on Saturday, February...

Send flowers to the Brown family.