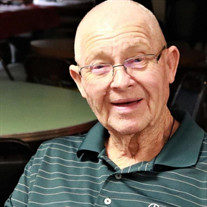 William “Bill” L. Wise, age 83, of Galesburg, Illinois died on Monday, February 22, 2021 at OSF St. Francis Medical Center in Peoria, Illinois. Bill was born on November 9, 1937 in Galesburg, Illinois the son of Rolland C. and Imogene (Lindsey) Wise. He attended and graduated from Knoxville High School in 1955, and then Western Illinois University in Macomb, Illinois. He married Phyllis Frances Paul on June 6, 1959 in Galesburg, Illinois. She preceded him in death on April 4, 2003. Surviving is a daughter, Lynn (Rick) Tenneson of Somerville, Alabama and one son J.C. (Jane) Wise of Galesburg, Illinois; two grandchildren: David (Heather)Tenneson and their children, Raley, Audrey and Hannah Tenneson of Madison, Alabama, and Lindsey (Brian) Mitchell and their child, Bailey Mitchell of Birmingham, Alabama. He was preceded in death by his parents, wife and one brother, Clark Wise. Bill was a teacher and a coach at ROVA School District for 35 years and then part-time for 11 years. He was inducted into the Illinois High School Football coach Hall of Fame in 1995 and the ROWVA High School Hall of Fame in 2012. He was a former member of the Oneida Masonic Lodge, member of the Delta sigma Phi, and the Rock Steady Boxing of Galesburg, Illinois. He enjoyed fishing and golfing. Private memorial services will be held on Saturday, February 27, 2021 at the Hurd-Hendricks Funeral Homes and Crematory in Knoxville, Illinois. An intended Celebration of Life will be held at a later date. Memorials may be made to the ROWVA Foundation or the Charity of the Donor’s Choice. On-line condolences and/or expressions of sympathy may be sent through www.hurd-hendricksfuneralhome.com

The family of William "Bill" L. Wise created this Life Tributes page to make it easy to share your memories.

Send flowers to the Wise family.