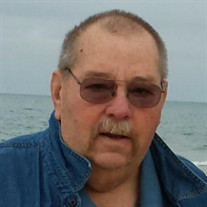 William R. “Bill” Hall, 77, of Galesburg, died on Wednesday, October 14,2020, 11:55 AM, at Generations at Peoria. Bill was born on January 3, 1943, in Fulton County, Illinois. He was the son of William F. and Alma M. (Whitehead) Hall. He married Nelma (Courter) Curtis on January 26, 1968 in Galesburg. Together they celebrated 44 years of marriage. She preceded him in death on April 21, 2012. Bill is survived by his son, Mark and Christine Curtis and family of Plant City FL; siblings, Melissa and Robert Jensen, Rebecca and Howard Tucker and family, Jack Hall and Kathy Hall and family; and grandchildren, Elijah and Heather Brazee and family, Christopher and Rachel Curtis and family, and Allison and Brooks Lopez and family. He was preceded in death by his parents; wife; and daughter, Melody Curtis-Brazee. Bill graduated from Canton High School. He was a veteran of the United States Navy, serving during the Vietnam War. He worked for the BNSF Railroad, retiring as a conductor. Bill enjoyed going hunting and fishing, gambling, car shows. He was a loving husband to Nelma and father to Mark and Melody. Private graveside services were held at Memorial Park Cemetery, Galesburg. Arrangements have been entrusted with Hurd-Hendricks Funeral Homes and Crematory, Knoxville. Expressions of sympathy may be left for the family at www.hurd-hendricks.com.

The family of William R. Hall created this Life Tributes page to make it easy to share your memories.

Send flowers to the Hall family.