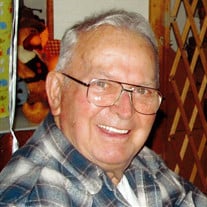 On April 3, 2018, surrounded by his family, William (Bill) Jr. Sharp, 92, did exactly what he had wished for and that was to pass away in his home as the Lord called him home. Formerly of Logansport, IN, Bill lived on the farm he built with his wife and children in Gilson, IL. Bill was born on March 7th, 1926 in Logansport, IN, the son of William L. and Faye (Sprinkle) Sharp. He married the love of his life Elbirdie M. Justice on October 19th, 1947 in Knoxville, IL. They spent 71 wonderful years of marriage together. He will be waiting for her in heaven. They are the proud parents of Debbie (Jim) Parlier, of Knoxville, IL, Marty Sharp, of Maquon, IL, and Lisa (Randy) Hahn of Gilson, IL. Bill was the proud grandfather of six wonderful children; Nicholas Sharp, Zachary (Shannon) Sharp, Nathan Sharp, Tanya Sharp, Danielle (Andrew) Krohn and Brandon Hahn. But the ones that had the most special place in his heart are his eight great – grandchildren: Tyson, Braxton, Gabriel, Alexander, Aiden, River, Hunter and Caeden. Emmi Sharp preceded him in death. When a great-grandchild would enter the same room that Bill occupied, Bill would instantly light up with joy and love. There are no words to describe how proud he was of each one. Bill loved family and loved being around his siblings. Surviving are Eileen Lewis of Logansport, IN, Myron (Joy) Sharp of Howe, IN, Charles Sharp of London, OH, and Alan Sharp of Goodland, IN. He was preceded in death by Kathleen Halopka, Maurice Sharp and Jim Sharp. The greatest memories were the family reunions in Logansport each year. Bill and Birdies marriage was one for everyone to model. Their love and support for each other was shown every minute of every day, no matter how ornery they would be to one another. Their last anniversary was spent with family and friends from all over showing their love and support. In Bills early years he protected this beautiful country by joining the United States Air Force in 1944. He served in the European Theatre and World War II. Bill also worked for BNSF as a locomotive engineer for 40 years before retiring to spend time on the family farm that he and Birdie fabricated together. Bills passion was being an outdoorsman. He enjoyed fishing and hunting. Bill taught his grandchildren the art and skills of hunting as well. His favorite vacation expeditions were his trips he took to Alaska to fish and hunt. Bill thoroughly enjoyed going out to eat with his family. He especially loved devouring on the buffet at Sirloin Stockade in Galesburg. Visitation will be at Hurd-Hendricks Funeral Home in Knoxville on Friday, April 6, 2018 from 6:00 P.M. to 8 P.M. Funeral services will be at the Oaks Community Church (1868 Congregation Rd, Dahinda, IL 61428) on Saturday, April 7, 2018 at 10:00 A.M. with Rev. Marty Briney officiating. Interment will be at Haynes Cemetery in rural Delong, Illinois. In lieu of flowers, memorials may be made out to St Jude’s in his honor. Online condolences may be left at www.hurd-hendricksfuneralhome.com

On April 3, 2018, surrounded by his family, William (Bill) Jr. Sharp, 92, did exactly what he had wished for and that was to pass away in his home as the Lord called him home. Formerly of Logansport, IN, Bill lived on the farm he built with... View Obituary & Service Information

The family of William "Bill" Sharp created this Life Tributes page to make it easy to share your memories.

Send flowers to the Sharp family.