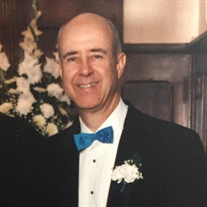 William E. Becker, 83, formerly of Chalfont, Pennsylvania, passed away on Monday, December 7, 2020, 9:58 AM at OSF St. Mary Medical Center, Galesburg, Illinois. William was born on February 15, 1937 in Ames, Iowa. He was the son of Elery and Helen (Grill) Becker. He married Marilyn J. Hastings. She survives. Also surviving are his daughters, Pamela Wells of Knoxville, Illinois and Catherine (David) Stahovich of Reinholds, Pennsylvania, and four grandchildren, Cheryl and Cameron Wells and Daniel and Joshua Stahovich. He was preceded in death by his parents, sister, Trudy Sample and a brother, Ronald Becker. William attended school in Ames, Iowa. He received his bachelor’s degree at Grinnell College & Rensselaer Polytechnic Institute, and attended Princeton for his graduate studies. William was a veteran of the United States Air Force and served from 1961-1965. While in the Air Force, William was an officer instructor in aircraft maintenance at Chanute Air Force Base. He then went on to spend 30 years as an aerospace engineer for the Naval Air Development Center in Warminster, PA. After retiring he worked as a contractor for the federal government. William was an avid bicyclist, having participated in many bike rides including RAGBRAI. He had a lifetime love of airplanes & flying including model ones. William also enjoyed reading, volunteering and was a World War II history buff. He had a soft spot for animals and a deep love for his community. Most of all, William was a loving father and grandfather. Per William’s request cremation rites have been accorded. A private family burial of cremated remains will be held in Pennsylvania at a later date. Arrangements have been entrusted with Hurd-Hendricks Funeral Homes and Crematory, Knoxville. Memorials may be made to MD Anderson Center at www.mdanderson.org, or to the Disabled American Veterans Organization at www.dav.org. On-line condolences and expressions of sympathy may be made through www.hurd-hendricksfuneralhome.com

William E. Becker, 83, formerly of Chalfont, Pennsylvania, passed away on Monday, December 7, 2020, 9:58 AM at OSF St. Mary Medical Center, Galesburg, Illinois. William was born on February 15, 1937 in Ames, Iowa. He was the son of Elery... View Obituary & Service Information

The family of William E. Becker created this Life Tributes page to make it easy to share your memories.

Send flowers to the Becker family.