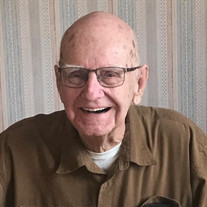 William “Bill” A. Barnum, 90, of Dahinda, Illinois, passed away at 10:47 P.M. Saturday, November 3, 2018 at Cottage Hospital in Galesburg, Illinois. Bill was born on April 9, 1928 in Chicago, Illinois, the son of Abbott Barnum and Gretchen (Baily) Barnum. In 1946 he graduated from Ridgewood High School in Ridgewood, New Jersey. After high school, he moved to Galesburg, Illinois to attend Knox College where he graduated with a chemistry degree. In July of 1951 he served his country during the Korean War as a member of The United States Army. He was Honorably Discharged in June of 1953. Bill married Sharon Burkhard on April 20, 1957 in Ridgewood, New Jersey. They were married for 55 years until her passing on August 19, 2012. Bill worked for many years as a Pharmaceutical Chemist for Lederle Laboratories in Pearl River, New York. He was a member of the Knox College Fifty Year Club and the Oak Run Breakfast Club. He enjoyed playing golf, crossword puzzles, reading and bird watching. Bill owned and loved many dogs throughout his life, and also had a special connection with other dogs in the family or in his neighborhood. Bill was a distant relative of the Barnums of Barnum & Bailey Circus, and his great, great, grandfather Giddial Scott was the first white pioneer to farm in Galesburg Township and Knox County. His great, great, Uncle Wilson Alexander Scott was the first white man to stand on the grounds on the present site of Des Moines, Iowa, and donated the land where the capital now stands to the state. He is the one and only man buried on the grounds there. He was also distantly related to Harry Truman. He is survived by 3 children: Suzanne (Mike) Duni of Davidson, North Carolina, Scott (Janet) Barnum of Knoxville, Illinois, Kenneth (Laurie) Barnum of Springfield, Illinois; 6 grandchildren: Daniel (Kyle) Duni, David (Cami) Duni, Kristi (Taylor) Shores, Steven Barnum, Amy Barnum, Richard Barnum; and 1 great-grandchild: Hudson Shores. He was preceded in death by his wife, Sharon Barnum; parents, Abbott and Gretchen Barnum; brother, Robert Barnum; and grandson, Michael Duni. Cremation rites will be accorded with the Hurd-Hendricks Funeral Home and Crematory in Knoxville, Illinois. Interment will take place at a later date. Memorial contributions may be left to the Oak Run First Responders or the Knox County Humane Society. Online condolences can be made at www.hurd-hendricksfuneralhome.com

The family of William A. Barnum created this Life Tributes page to make it easy to share your memories.

Send flowers to the Barnum family.