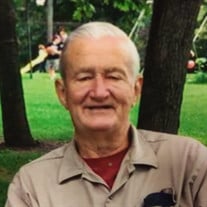 Willard D. Strom, Jr., age 73, of Victoria, Illinois, passed away at 3:54 P.M. on Friday, November 9, 2018 at the OSF Richard L. Owens Hospice Home in Peoria, Illinois. He was born to Willard D. Strom, Sr. and Norma M. (Jaynes) Strom on September 5, 1945. He was raised with his brother, Jack, in Victoria. Willard was a member of the ROVA class of 1963. In 1964 he began working at Midwest Manufacturing, (Maytag), retiring in December 2002. In 1965 he enlisted into the United States Airforce. Upon completion of his training he was deployed to Germany. Before leaving for Germany, he was honorably discharged for medical reasons. He married Bonnie Welch on April 20, 1968. They raised their children together: Teresa Chandlee of Williamsfield, Illinois, Jennifer (and Jeffrey) Nichols of Knoxville, Illinois, and Eric (and Alicia) Strom of Knoxville. He married Judy Lewis in 2002, and they later divorced. He made his home in Victoria with his companion, Gloria Hunter, and her daughter, Sheila. Surviving are his children; fourteen grandchildren; four great-grandchildren; and his cat, Gracie. He was preceded in death by his brother, Jack Strom; and one nephew, Michael Genisio. He enjoyed hunting, fishing, and gardening. He was always up for a good conversation and never met a stranger. If you were his friend, you were a part of the family; if you were family, you were a life-long friend. There was nothing that he would not do for anyone. Visitation will be held on Wednesday, November 14, 2018 from 5:00 P.M. to 7:00 P.M. at the Hurd-Hendricks Funeral Home in Oneida, Illinois. Graveside services will be held on Thursday, November 15, 2018 at 10:00 A.M. at the Victoria Cemetery in Victoria. Deacon Michael Crummer will officiate. In lieu of flowers, memorial contributions may be made to the family or to a charity of the donor’s choice.

The family of Willard D. Strom Jr. created this Life Tributes page to make it easy to share your memories.

Send flowers to the Strom family.