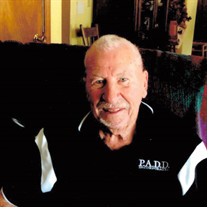 Willard Vaughn Larson, age 95 of Knoxville, Illinois died at 9:00 A.M. on Saturday, February 13, 2021 at OSF St. Mary Medical Center in Galesburg, Illinois. Willard was born on August 25, 1925 the son of Vaughn and Marie (Johnson) Larson. He attended and graduated from Knoxville High School in 1942 and then attended Augustana College and Western Illinois University. He married Norma Jean Truelove on January 4, 1948 in Victoria, Illinois. Surviving is his wife, Norma Larson of Knoxville, Illinois; his children: Dennis (Jane) Larson of Knoxville, Illinois, Paul (Linda) Larson of Knoxville, Illinois, Diane (Tim) Grady of Saddlebrooke, Missouri, and Mark (Kim) Larson of Oklahoma City, Oklahoma; Eleven grandchildren, 21 great grandchildren, and one great-great grandchild. One brother Ted (Marilyn) Larson of Knoxville, Illinois. Many other relatives and friends. He served his country during World War II, in the 3rd Army, 5th Infantry Division, and 2nd Infantry Regiment in Europe, receiving the Combat Infantry Badge, a Bronze Star, the Victory Medal, the American Theater Ribbon, the European African Middle Eastern Theater Ribbon with three Bronze Battle Stars, and the good conduct Medal. He was a member of the Harry Philblad American Legion Post #749 of Knoxville, Illinois, serving as both Past Commander and Chaplin. He farmed north of Knoxville for 43 years. He was a member of Grace Lutheran Church in Knoxville, Illinois and served on the Church Board. He was Knox Township Supervisor for 44 years, Knox County board of Supervisors for 22 years, and the Knox County Fair Board for 20 years. He was also a Master Mason of the Knoxville Masonic Pacific Lodge #66 A.F. & A.M., the Consistory Valley of Peoria, and the Mahomet Shrine of Peoria, Illinois. He was an avid fisherman with his fishing buddy, Mark Boyer and an avid hunter, he shot a Turkey when he was 91. He loved to take drives through his farm on his ATV. Willard spent 21 years wintering in Texas with Norma where they met a lot of longtime friends. Private Graveside Services will be held on Saturday, February 20, 2021. A Memorial and Celebration of Life will be held at a later date. In-lieu of flowers memorials may be made to the Knoxville American Legion Post #749 or to Grace Lutheran Church in Knoxville, Illinois. On-line condolences and/or expressions of sympathy may be sent through www.hurd-hendricksfuneralhome.com

The family of Willard Vaughn Larson created this Life Tributes page to make it easy to share your memories.

Send flowers to the Larson family.