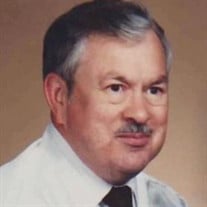 SANTA MARIA, Calif. - Wallace Eugene Howarter, 89, a longtime resident of Santa Maria, California, passed away peacefully on August 30, 2021. Wallace was born on Jan. 29, 1932, in Gilson, Illinois to Jewell and Wilbur Howarter. Wallace attended elementary, middle, and high school in Knoxville, Illinois. He met Joan Rose Lashbrook while attending Knoxville High School, and the two high school sweethearts were married Aug. 21, 1955. Wallace attended Bradley University in Peoria, Illinois, graduating with a degree in Electrical Engineering. He served in the United States Air Force, participating in the ROTC program, and was stationed in Japan in the mid-1950s. Wallace worked for Western Electric, a division of Bell Labs (later AT&T) for 30 years as an engineer, serving in that capacity at Vandenberg Air Force Base from 1963 until his retirement in 1989. Wallace was preceded in death by his wife, Joan Rose Howarter, parents, Jewell and Wilbur Howarter, his brother, Harold Lloyd Howarter, and his son, Nathan Deane Howarter. Wallace and Joan’s son Nathan was born with Osteogenesis Imperfecta (OI) or brittle bone disease, and required many surgeries and many, many years of loving care, which they tirelessly provided. Their loving care was foundational to Nathan’s many accomplishments in his 23 years, despite his severe disabilities. Wallace is survived by his son David; daughter-in-law, Debbie; and grandchildren, Christina, Jonathan, Alyssa and Amy; and by his sister, Darlene Johnson, of Galesburg, Illinois. Throughout Wallace’s final years, and as his health declined, he was blessed to receive comfort and care at home from the caregivers at Home Helpers Home Care, and in particular from Dorothy Moffitt. Dorothy became a dear and beloved friend to Wally and his family. In 2019, Wallace moved to Silver Hills Residential Care, where Allan Sepulveda and his wonderful staff at Silver Hills Residential Care provided comfort, and loving patient care. Dorothy and Allan are two of the most caring individuals we’ve known and our father and grandfather was so very fortunate to be under their care. Wallace’s family would like to express thanks and gratitude to them for spending time with him and caring for him. Funeral will be at 11am on Friday, September 17, 2021 at Hurd-Hendricks Funeral Homes & Crematory in Knoxville, Illinois. Rev. Dave Mustain of the Knoxville United Methodist Church officiating. Interment will follow at the Knoxville Cemetery. Online condolences or expressions of sympathy may be made through https://www.dudleyhoffmanmortuary.com or https://www.hurd-hendricksfuneralhome.com. In lieu of flowers, donations may be sent to the Osteogenesis Imperfecta Foundation at P.O. Box 824061, Philadelphia, PA 19182-4061, in memory of Wallace Howarter.

The family of Wallace Eugene Howarter created this Life Tributes page to make it easy to share your memories.

Send flowers to the Howarter family.