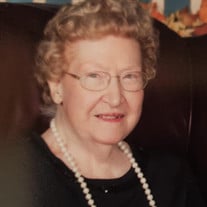 Virginia E. Musselman, 89, formerly of Knoxville, passed away on Thursday, January 27, 2022, 4:38 PM at OSF Richard Owens Hospice Home, Peoria. Virginia was born on September 20, 1932 in Princeville. She was the daughter of Walter and Mary (Miller) Smith. Virginia married David Lee Musselman in 1950. She is survived by her children, David W. (Rani) Musselman, Dan L. (Roxanne) Musselman, both of Texas and Delores (Monte) Walker of Dunlap; nine grandchildren, David A. Musselman, Adam Musselman, Philip Musselman, Emily Singleton, Mari-Michelle Wahlstrom, Malori Atmaca, Billy Musselman, Casey Walker and Peter Walker; nine great-grandchildren, Andrei, Nolan, Trent, Amelia, Jackson, Daniel, Lucy, Kendra and Kolby; and a sister, Joanne McGinn. She was preceded in death by her parents and a brother, Ronnie Smith. Virginia graduated as valedictorian of her class at Wyoming High School. She was a member of the Knoxville United Methodist Church. She was also a member of the Junior Women’s Club. Virginia loved to travel, especially internationally. She often times traveled on a whim, and would pack a suitcase and head to the airport and decide where she was going when she got to the counter. She even traveled to Japan on her own to see family. Most importantly, Virginia loved to spend time with her family. She was deeply loved and will be greatly missed. The family of Virginia would also like to thank the management and staff at Hawthorne Inn, Galesburg for the great care and compassion that was shown to Virginia and her family for the last ten years. Funeral services will be 11 AM on Saturday, February 12, 2022 at Hurd-Hendricks Funeral Homes and Crematory, Knoxville. Visitation will be one hour prior to the funeral service. Burial will follow the funeral service at the Princeville Township Cemetery, Princeville. Memorials may be made to the Knoxville United Methodist Church. On-line condolences and/or expressions of sympathy may be sent through www.hurd-hendricksfuneralhome.com

Virginia E. Musselman, 89, formerly of Knoxville, passed away on Thursday, January 27, 2022, 4:38 PM at OSF Richard Owens Hospice Home, Peoria. Virginia was born on September 20, 1932 in Princeville. She was the daughter of Walter and Mary... View Obituary & Service Information

The family of Virginia E. Musselman created this Life Tributes page to make it easy to share your memories.

Send flowers to the Musselman family.