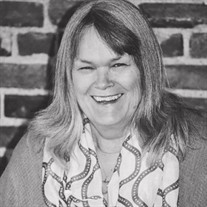 Vickie Jean (Garman) Banks, age 70, Galesburg, passed away on July 24, 2021. She joins her parents, Dale and Dot Garman and her husband and soulmate, Les Banks who preceded her. She is survived by her daughter, Kari (David) Caldwell, Galesburg, and stepdaughters Laurie (Cory) Lee, Alexis and Becky Lisenbee, Galesburg. She was grandmother to and survived by 8 grandchildren and 3 great grandchildren: Bo (Stephanie) Merritt and his children Isaac, Jeremiah and Naomi, Rebekah Merritt, Mataya Caldwell, Tyler Burris, Kalyn Lee, Ryan Lisenbee, Brandon Lisenbee, and Madison Michaels. She is also survived by sisters Deb Dugan and Susan (Steve) Duncan, nieces Kristi Wethington and Jennifer Crisp and families and nephew Dustin (Nicke) Kistler and their son Hunter. Vickie graduated from GHS in 1968. She received both her Bachelor’s and Master’s degrees in education from Western Illinois University. She taught 3rd grade at both Cooke and King elementary schools in Galesburg before moving to Arizona where she married Les. She taught kindergarten on the Gila River Indian Reservation while living in Mesa, AZ. She and Les especially enjoyed tent camping, dirt track racing, and traveling. They were fortunate to be able to travel to Japan, Germany, France, Venice, Italy, Switzerland and Austria as well as a good share of the United States. Vickie’s second career was in social work and she received a Master’s degree in social work from the University of Illinois. She was employed until her retirement in 2008 with the Illinois Department of Children and Family Services where she held positions as a child abuse investigator, supervisor and manger. Vickie’s love for children and compassion for people were evident in her two career paths. She was a member of the First Church of the Nazarene and also volunteered her time there and was a founding member of the Knox County Child Advocacy Board, Safe Harbor board member, volunteer reading buddy, volunteer for Carl Sandburg College’s literacy program tutoring adults for whom English was a second language and continued the tutoring after the CSC program ended, and as a Board member for the District 205 School Board. She was also a member of the Galesburg Kiwanis Club. Vickie loved anything to do with the grandchildren, especially attending various sports in which they were involved, performances they were in, and helping with school projects. She enjoyed working in the yard, growing flowers, reading, games, puzzles and bowling. Vickie enjoyed staying in touch with friends, family and former students via social networks. She was an avid fan of the St. Louis Cardinals, especially Ozzie Smith, Jim Edmonds, and Matt Carpenter. Anyone who knew her, especially former students, knew how she felt about Tom Selleck. Cremation rites will be accorded per her request. A memorial service will be at 11 AM on Saturday, July 31, 2021 at the First Church of the Nazarene, 1501 Webster Street, Galesburg, IL. Rev. Roland Grauman will officiate. Arrangements have been entrusted with Hurd-Hendricks Funeral Homes and Crematory, Knoxville. In lieu of flowers, memorials may be made to the Shriner’s Children Hospital, St. Jude’s Children’s Research Hospital and/or perform a random act of kindness in her memory. Above all, her wish was that we all be kinder to one another. On-line condolences or expressions of sympathy may be made through www.hurd-hendricksfuneralhome.com.

Vickie Jean (Garman) Banks, age 70, Galesburg, passed away on July 24, 2021. She joins her parents, Dale and Dot Garman and her husband and soulmate, Les Banks who preceded her. She is survived by her daughter, Kari (David) Caldwell, Galesburg,... View Obituary & Service Information

The family of Vickie J. Banks created this Life Tributes page to make it easy to share your memories.

Send flowers to the Banks family.