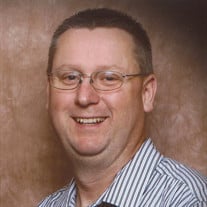 Tracy L. Butts, age 48, of Knoxville, Illinois died at 8:31 P.M. on Wednesday, December 13, 2017 at the OSF St. Francis Medical Center in Peoria, Illinois. He was born on September 5, 1969 in Galesburg, Illinois, the son of Harold and Lois... View Obituary & Service Information

The family of Tracy L. Butts created this Life Tributes page to make it easy to share your memories.

Send flowers to the Butts family.