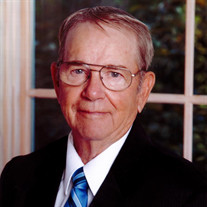 Theodore E. “Ted” Larson, 91, of Knoxville passed away on Thursday, December 30, 2021, 5:25 AM at the Knox County Nursing Home, Knoxville. Ted was born on August 24, 1930 in Galesburg. He was the son of Vaughn and Marie (Johnson) Larson. He grew up on the family farm northeast of Knoxville also known as “Barefoot Country.” He graduated from Knoxville High School in 1948 and went on to attend Carthage College. Ted served as a Staff Sergeant in the US Air Force during the Korean War stationed at Goose Bay, Labrador as a pharmacist. After the Air Force, he returned to Knoxville where he grew the family farm into North Fork Ranch and raised cattle and farmed the land. Ted was “Forever a Farmer.” In retirement he became an avid gun collector and was well known at the local auctions. Ted was also a life-long member of Grace Lutheran Church, the Knox County Farm Bureau, American Legion Post 749 and served as President of the Knoxville Fire Department. Ted is survived by his wife, Marilyn at home; his four daughters, Nancy Scalf of South Carolina, Paula Williamson of Galesburg, Carol (Pete Rose) Larson of Texas and Christine (Darren) Sharp of Knoxville; five grandchildren, Denise Scalf and Steve Scalf both of South Carolina, Justin Wiedeman and Sara Diamond both of Texas, and Haakon Soggie of Knoxville; six great-grandchildren and beloved nephews, nieces and cousins. He was preceded in death by his parents, beloved brother, Willard, granddaughter Shayla Marie, his wife Myrtle Larson and also his wife, Ruth Marie Larson whom he raised his girls with on the family farm until her death in 1984. Visitation will be from 10-11 AM, Saturday, January 8, 2022 at the Hurd-Hendricks Funeral Homes and Crematory, Knoxville. Funeral service will follow visitation at 11 AM at the funeral Home. Rev. Tucker O’Leary will officiate. Burial will follow services at the Knoxville Cemetery, Knoxville. Military rites will be conducted at the graveside. Hurd-Hendricks Funeral Homes and Crematory have been entrusted with the arrangements. Memorials may be made to the Grace Lutheran Church, Knoxville Fire Department or to the Harry Philblad American Legion, Post 749. On-line condolences and/or expressions of sympathy may be sent through www.hurd-hendricksfuneralhome.com

The family of Theodore E. "Ted" Larson created this Life Tributes page to make it easy to share your memories.

Theodore E. “Ted” Larson, 91, of Knoxville passed away on Thursday,...

Send flowers to the Larson family.