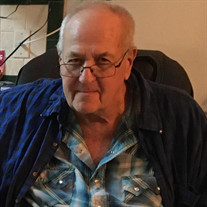 Terry L. Lufkin, 72, San Angelo, TX, passed away on Thursday, January 7, 2021, 1:27 PM at Shannon Medical Center, San Angelo. Terry was born May 12, 1948 in Galesburg. He was the son of Clifford “Tip” and Bernice (Traynor) Lufkin. Terry married Joyce Sims on August 7, 1981. She survives. Also surviving Terry are his children, Tracy (Jeff) Harms of Yates City, Lori (Richard) Osborn of Peoria, and Terry Lufkin, Jr. of San Angelo, TX; a brother, Jerry Lufkin of Arizona; five grandchildren, Jessica (Justin) Rose, Jordan (Austyn) Harms, Amber Wallace, Brad Osborn and Jenny Osborn; and six great-grandchildren. He was preceded in death by his parents, and six siblings, Rex Lufkin, Ted Lufkin, Norman Lufkin, Joan Coupland, Imogene Crow, Alberta Brittingham. Terry was a truck driver. He enjoyed gardening and spending time with his family. Terry had a wonderful sense of humor and was always up for a good laugh. His sense of humor and spirit will be greatly missed. Private family graveside services will be held on Friday, January 15, 2021 at the Knoxville Cemetery. Hurd-Hendricks Funeral Homes and Crematory of Knoxville has been entrusted with arrangements. Memorials may be made to the family to decide on a charity at a later date. Online condolences may be left to the family at www.hurd-hendricksfuneralhome.com.

The family of Terry L. Lufkin created this Life Tributes page to make it easy to share your memories.

Send flowers to the Lufkin family.