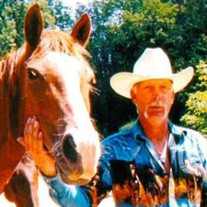 Terry Lee Bowman, age 67, of Cassopolis, Michigan, died peacefully Tuesday, September 24, 2019 in Ascension Borgess Hospital in Kalamazoo. He was born December 29, 1951 in Galesburg, Illinois, the older of two children of Ralph and Alice Bowman. He married his third wife, Bonita “Bonnie” Campbell October 29, 1994. She preceded him in death. Terry loved to bring flowers to the girls at his favorite restaurant. He loved being a cowboy and talked about his farm all the time. In addition to his daughters, Terry’s horses were his everything. Terry will be greatly missed by family and friends. He is survived by two daughters, Dawn Bowman and Tina Bland; nine grandchildren, including, Paige Bland, Natalie Moore, Kataryna Moore, Hunter Moore, Ricky Moore, Jr., Tyler Moore, Leia Seal; and a special cousin, Andrew Bowman. He was preceded in death by his parents; his wife, Bonnie; one son, Ricky Moore; and one sister, Linda Bowman. Mr. Bowman’s remains will be laid to rest beside his family in Oneida Cemetery in Oneida, Illinois. A memorial service will be held on Saturday, January 18, 2020 at 1:00 P.M. at the Hurd-Hendricks Funeral Home in Oneida. Inurnment will take place at the Oneida Cemetery.

The family of Terry L. Bowman created this Life Tributes page to make it easy to share your memories.

Send flowers to the Bowman family.