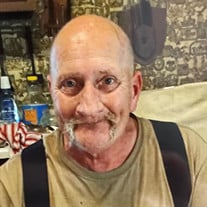 Not sure what to send?

Steve A. Locke passed away April 14th, 2022, at home on the farm that he loved. Steve was born December 5th, 1954, in Kewanee, IL to Lawrence and Mary Locke. Steve is survived by his siblings Rita, Clay (Kim), Jeannie and Larry. His daughters Mindy (Kevin), Missy (Lance), and Amy (Tony). His Son Josh. His grandchildren Brittany (Shawn), Steven, Chandler, Maddie, Kallie, Andrew, Shelby, Antonio, Ryan, Haley, Jordan, Hannah & Brendon. His great-grandchildren Ayla Bee, Wenny, Colby, Tyler Jett, Lydia, Colson, Macy & Mason. His lifelong friends John, Craig, Bear, Frank, Mitch & Roger, his devoted nephew Dave Rusk and all his country friends from his rural neighborhood. He was preceded in death by his parents and siblings John & Dixie. Steve never met a stranger and was well known for being able to strike up a conversation with anyone. He worked for the coal mines in Rapatee and later for Knoxville Transport. Steve enjoyed fishing, squirrel hunting, trapping and coon hunting with his coon dog Huck. He also loved to go mushroom hunting with Mindy & Ayla. One of Steve’s favorite pastimes was riding on his mule around the timber and to the creek on the farm. In 2016, Steve & Mindy were able to take a trip to the Grand Canyon, completing one of Steve’s bucketlist trips. Steve’s prized possession was his stereo that he loved to play loud & he was a die-hard Chicago Bears fan. Steve was well known for his famous sayings such as, “Ain’t seen you in a coons age”, “If you can’t run with the big dogs stay on the porch”, “Tougher than nails”, “Nuttin’ honey”, and “Finer than frog hair.” Steve was famous for tormenting everyone with “The Collarbone”. If Steve had one final thing to say to you all it would be, “Ya hear me? A.” No services will be planned, and cremation has been accorded. A Celebration of Life will be held Saturday June 25th, 2022, at 4:00 PM at the Knoxville Fairgrounds in the large building. Refreshments will be served. All are welcome to attend.

Steve A. Locke passed away April 14th, 2022, at home on the farm that he loved. Steve was born December 5th, 1954, in Kewanee, IL to Lawrence and Mary Locke. Steve is survived by his siblings Rita, Clay (Kim), Jeannie and Larry. His daughters... View Obituary & Service Information

The family of Steve A. Locke created this Life Tributes page to make it easy to share your memories.