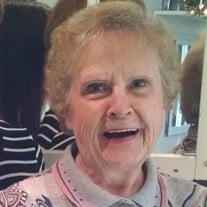 Shirley F. Braden, 89, of Galesburg, Illinois died on April 4, 2021 at 12:30 P.M. at Marigold Rehabilitation and Health Care Center in Galesburg, Illinois. Shirley was born on September 16, 1931, in Kewanee, Illinois the daughter of Calvin Jack and Myrtle Sally (Ward) Lee. She married Glen W. Braden on June 11, 1949 in Fairbanks, Alaska. He preceded her in death on October 27, 2020. Surviving Shirley is her daughter Sue (Steve) Peterson, Knoxville, Illinois; five grandchildren: Amber (Marc) Muscarello of Missouri City, Texas, Allison (Steve) Whitcher of Silvis, Illinois, Abby (Matt) Wiles of Galesburg, Illinois, Eric (Erica) Peterson of Omaha, Nebraska, Molly (Matt) Maaske of Knoxville, Illinois; sixteen great grandchildren; one great-great grandchild; and her sister, Marcia Duke of Galesburg. She was preceded in death by her parents; two brothers, Jack Lee and Eddie Lee; and one son, Glen W. “Bill” Braden Jr. Shirley was reared and educated in the Whethersfield area. She was a medical secretary for Dr. Glendenning and then later for Dr. Buelt at Buelt Chiropractic Office. Shirley was a member of the First Church of the Nazarene in Galesburg. She enjoyed playing the piano, singing, reading and reading the Bible. Most of all, Shirley loved to spend time with her family, especially her grandchildren and great grandchildren. Private graveside services will be held. Interment will be in the East Linwood Cemetery in Galesburg, Illinois. Memorials may be made to OSF Home Health and Hospice, 3405 N. Seminary Street, Galesburg, IL 61401. On-line condolences or expressions of sympathy may be made through www.hurd-hendricksfuneralhome.com

The family of Shirley F. Braden created this Life Tributes page to make it easy to share your memories.

Send flowers to the Braden family.