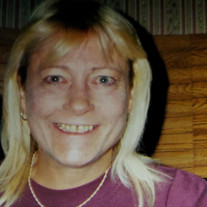 Sherie M. Lewis, 64 of Cameron, passed away surrounded by family, on Saturday, January 22, 2022 6:53 PM, at OSF St. Francis, Peoria. Sherie was born on August 7, 1957 in Galesburg. She was the daughter of Gerald Wayne and Donna Jo (Kelly) Holldorf. Sherie married Ed Brazee in 1975, she later married John Howard. Sherie married Jim Lewis in 2001, he preceded her in death in 2009. Sherie is survived by her children, Tabatha (Cleighton) Otten of Cameron, Nicole (Joseph) McKown of Dahinda and Chris (Tami) Brazee of Abingdon; her siblings, Ron (Terri) Hazen of Galesburg and Sarah Holldorf of Missouri; grandchildren, Zach, Riley, Ethan, Jayce, Tristin, Paige, Sophie, Lance, Clyde and Kamryn. She was preceded in death by her parents, husband, Jim and sister, Marilyn Holldorf. Sherie attended Galesburg schools where she was a cheerleader. She worked as a bartender and waitressed tables at the former Don’s restaurant. She also was a foreman for a tree trimming company while living in Texas and was a sales clerk for a former scooter store in Galesburg. Sherie loved to fish and go on road trips. She was always down for having a good time, and was most often the life of the party. She made friends wherever she went. Sherie was a very loving, giving and nonjudgmental person. Sherie was famous for her chicken and noodles and goulash (even if they were the only meals she was able to cook). Sherie will be greatly missed by those who loved her. Cremation rites have been accorded. A Celebration of Life will be from 1-5 PM on Sunday, January 30, 2022 Harry Philblad American Legion Post #749, 749 Henderson Road, Knoxville, Illinois. Hurd-Hendricks Funeral Homes and Crematory have been entrusted with the arrangements. Memorials may be made to the family in care of Nicole McKown or Tabatha Otten. On-line condolences and/or expressions of sympathy may be sent through www.hurd-hendricksfuneralhome.com.

Sherie M. Lewis, 64 of Cameron, passed away surrounded by family, on Saturday, January 22, 2022 6:53 PM, at OSF St. Francis, Peoria. Sherie was born on August 7, 1957 in Galesburg. She was the daughter of Gerald Wayne and Donna Jo (Kelly) Holldorf.... View Obituary & Service Information

The family of Sherie M. Lewis created this Life Tributes page to make it easy to share your memories.

Sherie M. Lewis, 64 of Cameron, passed away surrounded by family,...

Send flowers to the Lewis family.