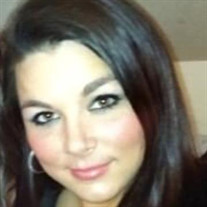 Shannon Moren, 36, of Galesburg, passed away on Tuesday, December 8, 2020 at OSF St. Francis Medical Center, Peoria. Shannon was born on May 30, 1984 in Galesburg. She was the daughter of Bruce Johnson and Mary (Bill) Kemper. Shannon married Andre Moren on April 20, 2013 in Galesburg. She is survived by her mother and stepfather, Mary and Bill of Galesburg; father, Bruce of Galesburg; children, Joseph Moren, Adriana Moren and Lilliana Moren; her siblings, Steve (Angie) Klapp of Galesburg, Carissa Johnson of Galesburg, Summer Johnson of Galesburg, Sheena Johnson of Des Moines, Iowa and Brittany Johnson of Galesburg; aunts, Lynn Unrathe of Knoxville and Marina Surrate of South Dakota; an uncle, Joel (Susan) Poole of Florida; and special close friends, Katrina Jackson, Shoni Johnson and Cindy Wagner. She was preceded in death by her maternal grandparents, Ruby Downard and Joseph Poole. Shannon attended Galesburg schools. She was a member of the First Church of the Nazarene in Galesburg. Shannon held many managerial positions. She lived in Cedar Rapids, Iowa for a number of years. Shannon enjoyed making jewelry and crafting. She was the life of the party and made the best out of every situation. She was always laughing and dancing. Shannon loved to entertain. She never knew a stranger. Shannon was fearless, loved by everyone and had a good heart. Cremation rites have been accorded. A visitation will be held at a later date at Hurd-Hendricks Funeral Homes and Crematory, Knoxville. Memorials may be made to the family to decide on a charity at a later date. On-line condolences and expressions of sympathy may be made through www.hurd-hendricksfuneralhome.com

Shannon Moren, 36, of Galesburg, passed away on Tuesday, December 8, 2020 at OSF St. Francis Medical Center, Peoria. Shannon was born on May 30, 1984 in Galesburg. She was the daughter of Bruce Johnson and Mary (Bill) Kemper. Shannon married... View Obituary & Service Information

The family of Shannon Moren created this Life Tributes page to make it easy to share your memories.

Shannon Moren, 36, of Galesburg, passed away on Tuesday, December...

Send flowers to the Moren family.