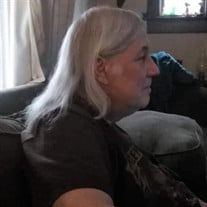 Scott A. “Little Nemo” Nemeth, 64, of Galesburg, passed away on Thursday, November 12, 2020 at OSF Richard Owens Hospice House, Peoria. Scott was born on September 26, 1956 in Galesburg. He was the son of Raymond and Patricia (Johnson) Nemeth. Scott married Lisa Smith at Coldbrook Christian Church, Cameron in August of 1988. They celebrated 31 years together. He is survived by his wife, Lisa of Galesburg; children, Brian (Barb Coleman) Nicholson of Wataga, Stephany (Joshua Lewis) Fisher of Monmouth, Nikiya (Ryan Mead) Nicholson of Galesburg; grandchildren, Benjamin Nicholson, Alex Mead, Caleb Nemeth, Prescott Nicholson, Camden Carter, Heather Nemeth, Flynn Nicholson, Naomi Mead, Alyssa Fisher, Lyberti Lewis and William Lewis; sister-in-law, Shirley Nemeth of Galesburg; several nieces and nephews; and a son. He was preceded in death by his parents; brothers, Patrick Nemeth and John Nemeth; and a nephew Michael Nemeth. Scott attended Galesburg schools and Carl Sandburg College. He was a housekeeping aide for Galesburg Cottage Hospital for over 25 years, retiring in 2017. Scott was a member of Corpus Christi Catholic Church. He was all about his family. He centered his life around his wife, children and grandchildren. Scott was also big on supporting Lisa in her efforts to support the community. Called the “Silent Volunteer,” Scott would assist Lisa with Helping Hands and Rebel Elves; whether it was fielding phone calls, organizing paperwork, or giving up space in his garage. He was also an avid Chicago Bears and St. Louis Cardinals fan. Music was important to Scott and was always listening to Rock-n-Roll or the Blues. He was deeply loved and will be greatly missed. Cremation rites have been accorded and no services are planned at this time. Arrangements have been entrusted with Hurd-Hendricks Funeral Homes and Crematory, Knoxville. The family has asked that memorials or donations are to be made to Rebel Elves. Expressions of sympathy may be left for the family at www.hurd-hendricksfuneralhome.com

The family of Scott A. "Little Nemo" Nemeth created this Life Tributes page to make it easy to share your memories.

Send flowers to the Nemeth family.