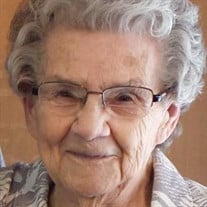 Sarah M. Greenstreet, 98, of Monmouth, IL, passed away at 4:15 PM, Monday, April 20, 2020 at the Monmouth Nursing Home, Monmouth IL. She was born June 12, 1921 in Schuyler County, IL the daughter of Henry and Hazel Faye (Carroll) Lenover. She was raised and educate in Brown County, IL. Sarah married Howard Cole of Versailles they had 6 children. She then married Grant Peterson of Swan Creek. She then married Charles Greenstreet of Monmouth and they had 2 children. During WWII Sarah moved to Monmouth, IL and worked at the Monmouth Pottery. In 1953 she began working as a cook at the Warren County Farm Nursing Home and A&W Root Beer Stand in Monmouth. She then moved to Chicago and worked as a cook in the cafeteria of a large bank. She returned to Bardolph, IL and worked as a cook at Corbin Hall for Western Illinois University. Later moving to Monmouth as a cook for Monmouth College, nurse’s aide at Pinewood Nursing Home and cook at Community Memorial Hospital until her retirement at 65. Sarah then became a home care provider for senior citizens. She worked in this capacity until she retired permanently at age 89. She loved her children and grandchildren and was referred to as Grandma by many. She loved to garden and grow flowers. She was an animal over raising many kinds over the years, dogs, cats, birds. She was a lifetime member of the Monmouth VFW and Founding Charter Member of the Monmouth Eagles Club. Survivors include her significant other of 41 years Emmett McGeehon, her children, Joan Hawkins, Monmouth, Maxine McAfee, Wooster Ohio, Robert Cole, Monmouth, Helen Burgess, Peoria, David (Kathy) Cole, Oneida, Daniel (Debbie) Cole, Monmouth, Peggy (Jeff) Ferch, Monmouth. 25 grandchildren, 54 great grandchildren, 7 great great grandchildren. One Brother Roy Benjamin Lenover, Monmouth and numerous nieces and nephews. She was preceded in death by her parents; stepmother Ara Lenover, one son Charles Greenstreet, three brothers, and four sisters. Cremation rites will be accorded. A graveside service will be held at Monmouth City Cemetery, Monmouth IL at a later date. Memorials may be given to Western Illinois Animal Rescue Monmouth IL. Hurd-Hendricks Funeral Homes & Crematory in Knoxville is in charge of arrangements. On-line condolences and expressions of sympathy may be made through www.hurd-hendricksfuneralhome.com.

The family of Sarah M. Greenstreet created this Life Tributes page to make it easy to share your memories.

Send flowers to the Greenstreet family.