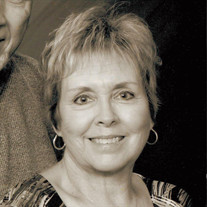 Sandra L. Spencer, age 71, of Knoxville, Illinois, died at 9:48 A.M. on Monday, August 19, 2019 at the OSF Saint Francis Medical Center in Peoria, Illinois. She was born on Monday, March 29, 1948 in Galesburg, Illinois, the daughter of Howard and Leta F. (Daughtery) Bern. She was reared and educated in the Galesburg area, graduating from Galesburg High School. Sandra married Terry Bradford in Galesburg in 1969. On December 14, 1990, Sandra was married to Jeffrey Spencer in Monmouth, Illinois. Sandra is survived by her loving husband, Jeffrey Spencer of Knoxville; five children: James (and Heather) Bradford of Oak Run, Dahinda, Illinois, Melissa Guthrie of Highlands Ranch, Colorado, David Bradford of Monmouth, Jeff Spencer of Columbia, South Carolina, Lucas Spencer of Columbia, South Carolina; three grandchildren: Kelcey (and Adam) Duffield of Minneapolis, Minnesota, Brenden Guthrie of Denver, Colorado, Kyle Bradford of Ames, Iowa; and one sister, Sharon Shea of Galesburg. She was preceded in death by her parents. Sandra operated her own day care out of her home in Galesburg for many years. She later worked as a teacher’s aide for the Lutheran preschool in Monmouth for over twelve years. Sandra was a dedicated member of her church, Faith Baptist Church of Galesburg, as well as Choral Dynamics. There were many past times she enjoyed, including shopping and spending quality time with her family and dogs, both of which she loved dearly. She was a wonderful mother, wife, grandmother, sister, and friend; she will be forever missed by all who knew her. Cremation rites will be accorded. Visitation will be held on Saturday, August 24, 2019 from 10:00 A.M. to 11:00 A.M. at the Faith Baptist Church, 1247 South Farnham Street, Galesburg, Illinois 61401. The memorial service will directly follow the visitation, Rev. Curt Lipe officiating. In lieu of flowers, memorial contributions may be made to the family. Inurnment will be held at a later date at the Oaklawn Memorial Gardens in Galesburg.

Sandra L. Spencer, age 71, of Knoxville, Illinois, died at 9:48 A.M. on Monday, August 19, 2019 at the OSF Saint Francis Medical Center in Peoria, Illinois. She was born on Monday, March 29, 1948 in Galesburg, Illinois, the daughter of Howard... View Obituary & Service Information

The family of Sandra L. Spencer created this Life Tributes page to make it easy to share your memories.

Send flowers to the Spencer family.