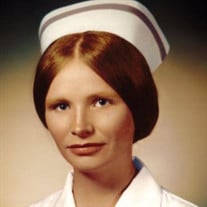 Sandra L. Reynolds, 70, of Galesburg, passed away on Tuesday, November 24, 2020, 12:44 AM at Galesburg Cottage Hospital. Sandra was born on June 26, 1950 in Omaha, Nebraska. She was the daughter of Francis E. and Rhoda M. (Vaness) Christy. Sandra married Walter E. “Junior”, “Walt” Reynolds, Jr. on January 13, 1975 in Omaha Nebraska. Together they celebrated 45 years of marriage. Sandra is survived by her husband, Walt of Galesburg; children, Ed Christy, of Snyder, Nebraska, Julie (Dan) McEwen of Galesburg, and Christy (Jeremy) Gerard of Oneida; grandchildren, Barb (David) Dickson, Josh (Rebecca) McEwen, Jessica McEwen, Jaren Gerard, Gavin Gerard, and Jayden Gerard; siblings Pat (John) Vampola, Elayne Launius, Allan Christy, Carol (Conrad) Marks, Virginia (Bruce) Pantzer. She was preceded in death by her parents. She was an LPN for the former Cottonwood for 18 years, retiring in 2004. She loved to spend time with her family and her dog, BJ. Cremation rites have been accorded. A Graveside memorial service will be held at 10:00 A.M. on Saturday, December 5, 2020 at the Oneida Cemetery, Oneida, Illinois. Memorial Contributions may be made to Northwoods, Galesburg Hospital’s Ambulance Services or to the Family. On-line condolences and expressions of sympathy may be made through www.hurd-hendricksfuneralhome.com

The family of Sandra Reynolds created this Life Tributes page to make it easy to share your memories.

Sandra L. Reynolds, 70, of Galesburg, passed away on Tuesday,...

Send flowers to the Reynolds family.