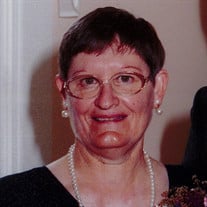 Ruth Ann Rogers, 82, of Oneida, passed away on Saturday, December 12, 2020, 6:20 AM at Heartland Healthcare Center, Galesburg. Ann was born on May 9, 1938 in Cushing, OK. She was the daughter of Carl and Ruth (Hock) Hagle. She married William “Bill” Rogers on June 6, 1965 in Valley Center, Kansas. Together they celebrated 55 years of marriage. Ann is survived by her loving husband, Bill; son, Todd (Jennifer) Rogers of Galesburg; brother, John (Polly) Hagle of Beaufort, NC; nephew, Andy (Michelle) Hagle of Concord, NC; and a niece, Abby (Rick) Adkins of Marietta, GA. She was preceded in death by her parents. Ann attended schools in Fort Recovery, Ohio. She obtained her Bachelors in Education from Ball State University in Muncie, IN. Ann was an educator for schools in Huston, OH and Valley Center, KS. After Bill and she made the move to Oneida in 1986, Ann would substitute teach for the ROWVA school district until her retirement. It was during her substituting for the ROWVA physical education classes that she earned her “stripes” and deemed the name “Sarge.” Ann was a member of the United Methodist Church of Oneida and the United Methodist Women’s Club. She was an avid Cincinnati Reds and St. Louis Cardinals fan. Ann loved the beach and enjoyed her camping trips with Bill. She never knew a stranger, and loved visiting with all sorts of people. Ann will be greatly missed by those who were honored to know her. Cremation rites have been accorded. A private family burial will be held at Oneida Cemetery. Hurd-Hendricks Funeral Homes and Crematory of Knoxville has been entrusted with arrangements. Memorials may be donated to the United Methodist Church of Oneida; Galesburg Rescue Mission or to a charity of the donors choosing. On-line condolences and expressions of sympathy may be made through www.hurd-hendricksfuneralhome.com

Ruth Ann Rogers, 82, of Oneida, passed away on Saturday, December 12, 2020, 6:20 AM at Heartland Healthcare Center, Galesburg. Ann was born on May 9, 1938 in Cushing, OK. She was the daughter of Carl and Ruth (Hock) Hagle. She married William... View Obituary & Service Information

The family of Ruth Ann Rogers created this Life Tributes page to make it easy to share your memories.

Ruth Ann Rogers, 82, of Oneida, passed away on Saturday, December...

Send flowers to the Rogers family.