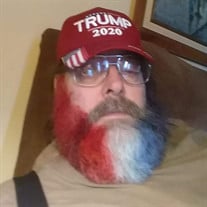 Russell R. Earnst, 64, of Galesburg, died on Tuesday, October 13, 2020, 5:43 AM, at OSF Richard L. Owens Hospice Home, Peoria. Russell was born on January 25, 1956 in Galesburg. He was the son of Harold and Alice (Kauffman) Earnst. Russell married Janet Ziegenhorn on September 18, 1989 in Davenport, Iowa. He is survived by his wife, Janet of Galesburg; children, Nishe Forshee, Kristina (Ben) Halfaday, Russell (Angie) Earnst, Erika (Greg Peinado) Ziegenhorn, and Minnie Lacock; siblings, Donald (Becky) Earnst of Knoxville, Vicky (Tom) Patterson of Pharr, Tx, Denise (Phillip) Jennings of Knoxville; sixteen grandchildren; nine great-grandchildren. Russell was preceded in death by his parents; son, Edward Coulter; and brother, Norman Earnst. Russell attended Knoxville Schools. He was owner and operator of Apocalypse Heating & Cooling. Russell was an ordained minister. He had a big heart and a loving soul. Russell would give the shirt off his back before he would let someone go without. He was strong willed, hardworking, and fun loving. Russell was extremely family oriented. He cherished the time he spent with his family. Cremation rites have been accorded. A memorial service will be held 10:00 AM, on Thursday, October, 22, 2020, at Hurd-Hendricks Funeral Homes and Crematory, Knoxville. A private family burial of cremated remains will be held at Oakhill Cemetery, Lewistown. Arrangements have been entrusted with Hurd-Hendricks Funeral Homes and Crematory, Knoxville. Memorials may be donated to the American Cancer Society. Due to COVID-19 restrictions, face masks, social distancing and attendance limitations will be required. Expressions of sympathy may be left for the family at www.hurd-hendricks.com.

The family of Russell R. Earnst created this Life Tributes page to make it easy to share your memories.

Send flowers to the Earnst family.