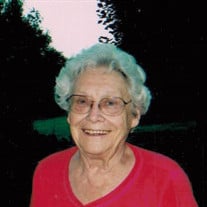 Rosemary Grohmann, age 91, of Rural Gilson, Illinois died at 5:30 A.M. on Wednesday, March 9, 2022 at her home. She was born on August 25, 1930 in Rapatee, Illinois the daughter of Ernest and Glenna (Groom) Link. She graduated from Maquon High School, the class of 1948. She married Clyde Grohmann on May 28, 1950 at the United Methodist Church in Delong, Illinois. He preceded her in death on March 9, 2007. She was also preceded in death by her son, Richard “Rick” Grohmann, one great-grandson, and three brothers, Ronald, Donny, and Alan. Surviving is her daughter, Nancy (Forrest) Thomas of London Mills, Illinois; her son, Ray (Pam) Grohmann of Lovington, Illinois; eight grandchildren: Forrie (Gena) Thomas, Chris Thomas, Mike (Kim) Thomas, Jeff (Tammi) Grohmann, Stacy (Sean Riggs) Grohmann, Michelle (Jason) Porzelius, Heather Grohmann-Skelley and Danny (Robin) Grohmann; twelve great grandchildren; one great-great grandson; one sister, Janet (John) Bradshaw of Abingdon, Illinois. Rosemary was a school teacher for twenty-five years receiving her Masters in Education from Western Illinois University. She taught at Gilson School, Delong School, and then at Knoxville Junior High School until retirement. She was a member of the Delong Book Club. She attended the former Orange Chapel Church where she played the piano. She enjoyed gardening and attending the Knox County Fair, where she enjoyed helping with the poultry, watching her grandchildren, and being with family and friends. Visitation will be held from 2:00 to 5:00 P.M. on Sunday, March 13, 2022 at the Hurd-Hendricks Funeral Homes & Crematory in Knoxville, Illinois. Funeral Services will be held at 10:30 A.M. on Monday, March 14, 2022 at the funeral home with Rev. Scott Carnes officiating. She will be laid to rest at Haynes Cemetery in rural Delong, Illinois. Memorials may be made to the Knox County 4-H Foundation. On-line condolences and/or expressions of sympathy may be sent through www.hurd-hendricksfuneralhome.com

Rosemary Grohmann, age 91, of Rural Gilson, Illinois died at 5:30 A.M. on Wednesday, March 9, 2022 at her home. She was born on August 25, 1930 in Rapatee, Illinois the daughter of Ernest and Glenna (Groom) Link. She graduated from Maquon High... View Obituary & Service Information

The family of Rosemary Grohmann created this Life Tributes page to make it easy to share your memories.

Send flowers to the Grohmann family.