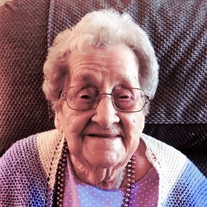 Rosemary Cowman, age 103, of Knoxville, Illinois, formerly of Maquon, Illinois, died at 6:23 P.M. on Sunday, April 28, 2019 at the Courtyard Estates in Knoxville. She was born on February 22, 1916 in Knox County, the daughter of Roswell and Claire (Talla) Johnson. She graduated from the Knoxville Senior High School in 1933. Rosemary married Laverne Bigelow Cowman on October 31, 1936. He preceded her in death on December 18, 1982. Rosemary is survived by her four children: Gary (and Rene Ann) Cowman of Taylorsville, Utah, Don (and Joan) Cowman of Galesburg, Rosalie (and Marty) Holzman of Julian, California, Jane (and Dennis) Larson of Knoxville; eight grandchildren: Vern (and Denise) Van de Loo of Gilbert, Arizona, Blake (and Monica) Van de Loo of Morristown, Arizona, April Janrae (and Gil) Douglas of Burlington, Iowa, Tara (and Don) Lauderback of Queencreek, Arizona, Shawn (and Diane) Cowman of Courtdale, Pennsylvania, Tori Veatch of Highlands Ranch, Colorado, Shane (and Tina) Larson of Dunlap, Illinois, Greg (and Amy) Larson of Knoxville; twenty-one great-grandchildren: Grant Larson, Macy Larson, Anna Larson, Garrett Larson, Madison Cravens, Marisa Darche, Racheal Douglas, Doug (and Rachel) Douglas, Jenny (and Kevin) Doyle, Mathew Ponsness, Katie (and Tyler) Montgomery, Justin Van de Loo, Lauren (and Nick) Garzia, Rachel (and Matt) Gidney, Tanner Lauderback, Demi Lauderback, Trevin (and Brittany) Cowman, Tyler Cowman, Trey Cowman, Ellie Veatch, Cole Veatch; and seven great-great-grandchildren: Mia, Easton and Tillman Doyle, Landon, Henley and Colt Montgomery, and Liam Walter. She was preceded in death by her husband, Laverne; two grandsons: Douglas Todd Cowman, Craig McKenna; four brothers: Kenneth Johnson, Francis Johnson, Deane Johnson, Joe Johnson; and four sisters: Phyllis Westerfield, Janice Dewitt, Margaret Porter, and Davia Lee “Deb” Abbott. Rosemary was a farmer’s wife and worked right beside her husband in their farming business. She also had a cake decorating business for 20 years, was a 4-H leader for many years, and was very active with the Maquon Methodist Church. Her volunteer work included cooking for senior citizens in Maquon with a group of women, volunteering at the Maquon Scenic Drive and Knox County Scenic Drive, as well as being a MYF Leader. She was a former member of the Lucretia Leffingwell Chapter of the D.A.R. and Prime Timers. Rosemary also served as the Knox County Federation President in 1933, and was the 1933 Knox County Beauty Contest Queen. In 1954, she was the first lady to be given the honorary FFA Chapter Farmer Award at Knoxville High School. Rosemary was known for her handmade greeting cards, which she sent to family and friends and donated to the military, OSF Palliative Care, and the Maquon United Methodist Church. She was chosen in 2015 and 2018 as the WMBD CI Proud Hero of the Week. Other pastimes she enjoyed included sewing and quilting. She also enjoyed her computer and keeping up with loved ones on Facebook. Rosemary’s family would like to express their special and sincere thanks to the staff at the Courtyard Estates of Knoxville and Hospice Compassus for the wonderful care given to Mom, as well as ALL those who took time to visit Mom. She enjoyed those visits so much. Cremation rites will be accorded. A graveside memorial service will be held at 10:30 A.M. on June 22, 2019 at the Maquon Cemetery in Maquon, Illinois, Pastor Dan Doty officiating. A Celebration of Life will be held from 12:00 P.M. to 2:00 P.M. on June 22, 2019 at the Hurd-Hendricks Fellowship Center in Knoxville, Illinois. In-lieu of flowers, memorial contributions may be made to the donor’s choice of Maquon United Methodist Church or the Courtyard Estates of Knoxville. To send flowers or a memorial gift to the family of Rosemary Cowman please visit our Sympathy Store.
To send flowers to the family in memory of Rosemary Cowman, please visit our flower store.