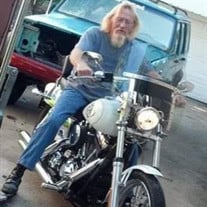 Rodney D. “Rod” Miller, 64, of Galesburg, passed away on Tuesday, August 18, 2020, 5:30 PM, at his home, surrounded by his family. Rod was born July 30, 1956 in Avon, Illinois. He was the son of Gene and Carma (Vincent) Miller. He married Lisa Hoskins on June 27, 2020 in Galesburg. Rod is survived by his wife, Lisa, at home; sons, Gary Miller of Texas and Billy Miller of Galesburg; two stepdaughters, Deanna Sink, Burlington and Stephanie Swan, Bushnell; brother, Bob (Cindy) Miller; stepbrother, Duane Collins; five grandchildren; eight step-grandchildren; and numerous nieces, nephews and cousins. He was preceded in death by his parents; brother, Ronnie Miller; sister, Melinda Miller; and his beloved four-legged pal, K.W. Rod attended Macomb and Knoxville Schools. He also studied at Carl Sandburg College, Galesburg. He is a veteran of the United States Marine Corps. Rod was a former police officer in Gilson and Maquon. He also worked a number of years at the Abingdon Pottery. Rod then went on to acquiring his CDL and driving semis. After his retirement, he would work part-time doing home improvements. Rod was a jack of all trades and could fix almost anything. He loved trucking and riding his Harley. He also enjoyed camping and gardening, especially taking care of his perennials. Rod was greatly loved and will be deeply missed. Cremation rites have been accorded. A private burial of cremated remains will be held at a later date. Military rites will be conducted at the graveside by the Harry E. Wiles American Legion Post #381, Abingdon. Arrangements have been entrusted with Hurd-Hendricks Funeral Homes and Crematory, Knoxville. Condolences may be left to the family at www.hurd-hendricks.com.

The family of Rodney D Miller created this Life Tributes page to make it easy to share your memories.

Send flowers to the Miller family.