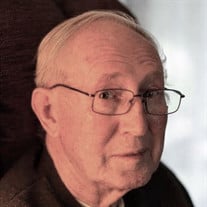 Robert Thomas Simmons, 85, went home to be with his Lord on Wednesday, May 13, 2020 at 6:25am. He died at home of natural causes. Bob was born October 21, 1934 in Hardinsburg Kentucky to Hubert and Mayme (Barlow) Simmons. He married Serena (Murphy) on June 10, 1955. Survived by his wife Serena, his two daughters Teresa Simmons of Macomb, and Missy (Paul) Hinton of Delong, One grandson Christopher Thomas Simmons of Montreal, Canada, and 2 step granddaughters, Katie Hinton of Michigan, and Sasha (Josh) Swilley of Florida. Two Brothers, Hugh (Janice) Simmons of East Moline, Illinois, and Dan (M’Len) Simmons of Galesburg, and a sister Dixie (Roger) Matthews of Lodi, California. Preceding him in death were his Father, Mother, Step Mother and 2 Sisters Kathie Clark and Peggy Ann White. Bob served in the United States Air Force for 4 years. He worked for Admiral-Maytag for 40 years, retiring in 1993. While working at Maytag, he attended Carl Sandburg College, earning his Associate Degree in Computer Science Bob was a faithful member of Bethany Baptist Church in Galesburg Illinois for over 55 years. Bob enjoyed his retirement spending 19 wonderful winters in Florida with his wife. They also enjoyed traveling to Australia, France, Hawaii, Alaska, and Canada. Bob built the only 2 homes that he raised his family in. He also enjoyed Hunting, Boating, Gardening, but his greatest love and enjoyment came from spending time with his family. Due to social distancing limitations related to the COVID-19 pandemic, there will be no visitation. A private funeral service will be held on Friday, May 15, 2020 at the Hurd-Hendricks Funeral Homes & Crematory in Knoxville, Illinois, Pastor Dan Simmons will officiate. Burial will be at the Knoxville Cemetery, Knoxville, Illinois. A celebration of life will be held at a late date. Memorial contributions may be made to Bethany Baptist Church, Galesburg Illinois. On-line condolences and expressions of sympathy may be made through www.hurd-hendricksfuneralhome.com.

Robert Thomas Simmons, 85, went home to be with his Lord on Wednesday, May 13, 2020 at 6:25am. He died at home of natural causes. Bob was born October 21, 1934 in Hardinsburg Kentucky to Hubert and Mayme (Barlow) Simmons. He married Serena... View Obituary & Service Information

The family of Robert Thomas Simmons created this Life Tributes page to make it easy to share your memories.

Robert Thomas Simmons, 85, went home to be with his Lord on Wednesday,...

Send flowers to the Simmons family.