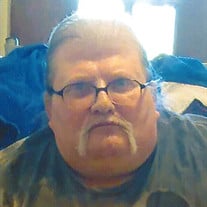 Robert L. Huston, age 65, of Galesburg, Illinois, died at 9:58 P.M. on Tuesday, January 2, 2018 at the Genesis East Hospital in Davenport, Iowa. He was born on September 25, 1952 in Cambridge, Illinois, the son of William and Betty (Luallen)... View Obituary & Service Information

The family of Robert L. Huston created this Life Tributes page to make it easy to share your memories.

Send flowers to the Huston family.