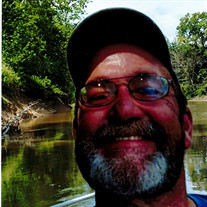 Robert “Brad” Rosecrans, age 59 of Galesburg, Illinois passed away on Sunday, March 18, 2018 at his home in Galesburg, Illinois. Brad was born on March 10, 1959 in Redondo Beach, California the son of Robert “Bob” and Mary (Boyd) Rosecrans. He attended and graduated from Yates City High School in Yates City, Illinois. He married Linda L. Walter on May 21, 1988 at Orange Chapel Church in rural Knoxville, Illinois. Surviving is one son, Dylan (Zoe Zimmerman) Rosecrans of Maquon, Illinois; two daughters, Kylie Jo Rosecrans and Jennifer Rosecrans, both of Maquon, Illinois. One sister, Linda Streitmatter of Yates City, Illinois; a nephew, Daniel (Jonna) Schaub. He was preceded in death by his parents. Brad enjoyed fishing with his daughter, Kylie; hunting and working on things with his daughter, Jen; fishing, hunting, and working on things together with his son Dylan. He was creative with his hands. Family was important to him. He was a member of the Maquon Fire Protection District for 17 years. He enjoyed NASCAR and Muscle Cars. Visitation will be held from 5:00 PM to 7:00 PM on Friday, March 23, 2018 at the Hurd-Hendricks Funeral Homes & Crematory in Knoxville, Illinois. Private Memorial Graveside will be held at a later date a Lehigh Cemetery in Rural Yates City, Illinois. Memorials may be made to the Maquon Fire Protection District.

The family of Robert "Brad" Rosecrans created this Life Tributes page to make it easy to share your memories.

Send flowers to the Rosecrans family.