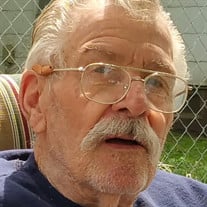 Robert L. “Bob” Asbury, age 83, of Gilson, Illinois, died at 5:22 A.M. on Tuesday, April 9, 2019 at his home in Gilson, surrounded by his family. He was born on September 18, 1935 in Williamsfield, Illinois, the son of Ira and Millie Asbury. Bob proudly served his country in the United States Airforce as a plane mechanic. On July 17, 1965, he married Linda Mae Robertson. Left to cherish his memory is his wife, Linda M. Asbury of Gilson; their three children: Debbie (and Shan Henley) Asbury of Galesburg, Illinois, Kim (and Harry) Truitt of Franktown, Colorado, Bobby (and Bonnie) Asbury of Galesburg; three grandchildren; four great-grandchildren; one great-great-grandchild; and one brother, Wayne (and Mae) Asbury of Knoxville, Illinois. He was preceded in death by his parents; and one brother, Tom Asbury. Bob owned and operated Asbury Concrete Construction and AEH Construction, both of Galesburg, where he worked as a cement contractor. He enjoyed collecting antiques and going to auctions. Visitation will be held on Thursday, April 11, 2019 from 5:00 P.M. to 7:00 P.M. at the Hurd-Hendricks Funeral Home & Crematory in Knoxville. Funeral services will be held on Friday, April 12, 2019 at 11:00 A.M. at the Hurd-Hendricks Funeral Home & Crematory in Knoxville. Rev. Jordan Knight will be officiating. Interment will be at the Red Oak Cemetery in Cambridge, Illinois. Memorial contributions may be made to Hospice Compassus.

The family of Robert "Bob" L. Asbury created this Life Tributes page to make it easy to share your memories.

Send flowers to the Asbury family.