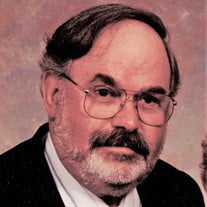 Richard O. Pruett, 86, of Maquon, Illinois, died at 4:45 P.M. Tuesday, October 30th, 2018 after a brief stay in the care of Hospice Compassus at the Heartland Health Care Center in Galesburg, Illinois. Richard was born on August 14th, 1932 in Maquon, Illinois. He was the son of Ottes and Ruth (Cramer) Pruett. Richard was educated in the Maquon and Yates City area. Richard, during his senior year at Yates City High School, was awarded the Sons of the American Revolution Award. He graduated in 1950 from Yates City High School. Richard married Virginia Dikeman on May 27th, 1951 at her parents’ home in Yates City. Richard and Virginia were married for 55 years until her passing on February 22, 2007. Richard farmed for many years in the Maquon area and retired from Butler Manufacturing in Galesburg after 35 years. He was an avid reader of mysteries, particularly Agatha Christie books, he enjoyed traveling, was an advocate for all animals, and enjoyed woodworking. After retiring, mom and dad enjoyed attending auctions. They would pack their goodies in their cooler and off they would go for the day to see what treasures were in store for them. Richard served as a volunteer with the Maquon Ambulance Service. He was a member of the Maquon United Methodist Church in Maquon. Richard is survived by three children: Barbara S. Mitchell of Maquon, William O. (LuAnn) Pruett of Gilson, and Beverly R. (Dennis) Evans of Universal City, Texas; 7 grandchildren; and 14 great-grandchildren. He was preceded in death by his parents, Ott and Ruth (Cramer) Pruett; stepmother, Doris Pruett; his wife, Virginia Pruett; his sister, Virginia Banks; grandson, Marcus R. Mitchell; and two great-grandsons, Gavin Bitner and Bryant O. Pruett. Visitation will be Saturday, November 3, 2018 from 1:00 P.M. till 2:00 P.M. at the Hurd-Hendricks Funeral Home in Knoxville, Illinois. The funeral service will directly follow at 2:00 P.M. Interment will be at the Knoxville Cemetery. Reverend Dan Lybarger will be officiating the services. Memorial contributions may be left to the Maquon Fire and Rescue.

The family of Richard O. Pruett created this Life Tributes page to make it easy to share your memories.

Send flowers to the Pruett family.