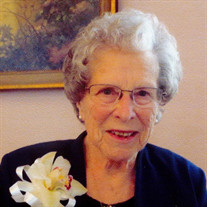 Regina Irene Sherman, age 95, of Knoxville, Illinois died at 9:45 P.M. on Saturday, December 5, 2020 at Courtyard in Bushnell, Illinois. Irene was born on June 26, 1925 in Ellisville, Illinois the daughter of Glenn Ray and Blondelle (Cope) Clark. She attended and graduated from Maquon High School in 1943, then she attended from the Bradley Institute of Music and the Peoria Institute of Business in Peoria, Illinois. She began teaching piano at the age of sixteen. She married Robert C. Sherman on October 9, 1943 in Maquon, Illinois. He preceded her in death on February 6, 1996. Surviving are two daughters, Diane Dikeman of Frisco, Texas and Betty (Vern) Haffner of Good Hope, Illinois and one son, Ray (Reba) Sherman of Parker, Colorado; four grandchildren, Shanan (Chris) Brown, Jon Reed, Jody Reed, and Stacy Evans; five step-great grandchildren, Emma Nelson, Stephen Gleason, Char Gleason, Ava Haffner and Sienna Haffner; seven great grandchildren, Ian Reed, Jocelynn Reed, Brooklynn Reed, Zakary Brown, Jonathan Brown, Brooke Evans and Scott Sherman; one sister, Helen Peek of Auburn, Illinois and one brother William Clark of Plano, Texas; a sister-in-law, JoAnn Clark, Knoxville, Illinois. She was preceded in death by her parents, husband, three brothers, Glenn Ray, Harold and Gerald; a step grandson, Sam, and a brother-in-law, Dwight Clark. Irene was a farm wife and mother, after her and her husband were married, they moved to rural Maquon, Illinois and farmed until 1991, when they moved to Knoxville, Illinois. She was a teacher’s helper in Ellisville helping 1st, 2nd, and 3rd graders. She operated a ceramic shop in Maquon for about 15 years. She was more well-known for playing the organ at the Maquon Methodist Church for seventy-five years as well as playing at Orange Chapel and Douglas churches. She also taught music to retirees after they retired and spent winter in Arizona. She was active in her community, being a member of the Lucretia Leffingwell Chapter of the DAR in Knoxville, Knoxville Women’s club, Maquon Methodist women and the American Legion Auxiliary Post 749, and was in charge of the Maquon Homecoming Association for many years. Private graveside services will be held at the Maquon Cemetery, Maquon, Illinois. Memorial Contributions may be made to the American Cancer Society, Maquon Methodist Church or the Maquon Homecoming Association. On-line condolences and/or expressions of sympathy may be made at www.hurd-hendricksfuneralhome.com

The family of Regina Irene Sherman created this Life Tributes page to make it easy to share your memories.

Send flowers to the Sherman family.