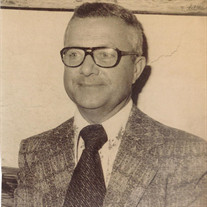 Raymond “Bud” Nelson passed away at the age of 102 at the Knox County Nursing Home on January 2, 2021 at 5:12 PM in Knoxville, Illinois. Bud was born on October 31st, 1918 in Champaign, IL and is preceded in death by his wife Arlene, Pauline, sister Genevieve and parents Blanche Cleveland and Raymond Nelson. Bud is survived by his children, Alan of Galesburg, Mark of Arizona and Steve of Colorado; nephew, Terry Chick of Bloomington and grandson, Jeremiah of Arizona. Bud served in the United States Army as a decoder responsible for decrypting sensitive and classified information. He was invited to participate in the Honor Flight Program which involved a flight to Washington, D.C. to see the World War II Monument and visit fellow service members. Following his military service, Bud had a successful State Farm Insurance business in Galesburg for more than 50 years. Bud was very engaging, social, and considerate person and easily developed many working relationships and friends. Because of his success as a business man, State Farm rewarded him with domestic and international travels. Bud was a member of social and philanthropic clubs, including Elks, Masonic Temple, Shriners and VFW. He was an avid outdoorsman that enjoyed fishing and pheasant hunting with friends. He enjoyed golfing, especially at his home course at Lake Bracken. Gardening was another passion of his spending countless hours manicuring his yard. He lived at Lake Bracken for many years and Key Largo, Florida during winter months before residing in Knoxville, IL in recent years. He had a very long incredible life and was mentally sharp and reasonably mobile until the time of his death. No services will be held at this time due to the pandemic. Hurd-Hendricks Funeral Homes and Crematory of Knoxville has been entrusted with arrangements. Online condolences may be left to the family at www.hurd-hendricksfuneralhome.com.

The family of Raymond "Bud" Nelson created this Life Tributes page to make it easy to share your memories.