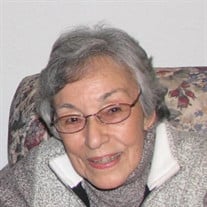 Pura Platti González, 101, of Galesburg, Illinois died on Saturday, November 6, 2021 at Woodridge, Galesburg, Illinois. She was born on July 19, 1920 in Ponce, Puerto Rico, the daughter of Luis and Rosalina (González) Platti. She married Charles Leker in 1938 in Ponce, PR, remarried in 1949 with Carlos Quiñones Pancorbo in Arecibo, PR, and remarried in 1991 with Angelo Gastaldo in Mayagüez, PR. Surviving are her children Aldo (Donna) Leker of Springfield, Missouri, and Elaine Dockery of Iowa City, Iowa; step-daughter, Clara (Rafi) García, San Juan, PR; a son-in-law, Jorge Prats of Galesburg; two nieces; one nephew; seven grandchildren; eight great-grandchildren; four great-great-grandchildren; and many friends. She was preceded in death by her parents; husbands; sister, María Teresa Capestany; step-son, Carlos Quiñones; and daughter, Edda (Leker) Prats. Ever curious, she studied Spanish Literature and was eager to engage in a wide range of topics, from linguistics to current events to the latest science. She lived most of her life in Puerto Rico, where she owned and operated the Parador Villa Parguera in La Parguera, and later managed inns throughout the island. Hosting guests was a favorite activity, both at the hotels and at her mountaintop home in Maricao. She was involved in her community, and a library was named in her honor. A talented artist, she loved painting, writing, and exhibiting her artwork. After moving to the Midwest in her later years, she remained active and engaged, even taking art classes at Carl Sandburg College in her nineties. The family invites you to share your memories of Pura at Hurd-Hendricks Funeral Homes & Crematory in Knoxville at 2:00 pm on Saturday, December 4, 2021, followed by a reception at 2:30 pm at the Hurd-Hendricks Fellowship Center, Knoxville. Due to the new COVID-19 Mask Mandate, the funeral home will maintain compliance and ask that guests wear a mask. Memorial contributions may be made to the National Ovarian Cancer Coalition and sent to the funeral home. On-line condolences and/or expressions of sympathy may be sent through www.hurd-hendricksfuneralhome.com.

The family of Pura Platti created this Life Tributes page to make it easy to share your memories.

Send flowers to the Platti family.